CGI no threat to actors -- for now, anyway

LOS ANGELES, Feb. 1 (UPI) -- Some Hollywood producers wonder, and some actors worry, about the chances that digital technology will render live actors obsolete, but a leading practitioner in the field of computer animation says actors' jobs are safe -- at least for now.

Alvy Ray Smith, who co-founded four of the top computer graphics centers in the business and won two Academy Awards for his work in computer-generated imaging, told United Press International that the day is coming when CGI will be able to produce fairly lifelike characters -- but it isn't coming any time soon.

"I think some of my colleagues have been a little glib about the end of acting," said Smith. "I tell actors not to be frightened because nobody knows how to get there, so it's not going to happen in our lifetime unless there's a sudden and surprising breakthrough."

Smith helped found the Altamira, Pixar, Lucasfilm and New York Tech computer graphics center. He won an Oscar for "Tin Toy," the first Academy Award-winning computer-generated short. He was part of the team that developed an Oscar-winning animation production system for Disney.

He left Pixar while the 1995 computer animated feature "Toy Story" was still in development, and eventually retired to devote more time to the emerging art form of digital photography.

This week, he delivered a lecture -- "Will Digital Actors Replace Human Ones?" -- as part of the University of Southern California Computer Science Distinguished Lecture Series.

In a telephone interview from his home in Seattle, Smith told UPI that actors don't have to worry about CGI throwing them out of work, but they do need to understand that filmmaking is changing and they need to change with it.

"There will be kind of an adaptation between acting as we know it today and something new in the future," he said.

In some movies, actors have already been replaced by CGI. Computer graphics were used to simulate large crowd scenes in "Gladiator" and passengers being tossed around the deck of a sinking ocean liner in "Titanic."

Smith said, however, that using CGI to replace actors in key roles would be impossible, given the current state of technology.

"Where it really matters, in close-ups, we don't know how to do it," said Smith. "There's no possible way that we know how to get from here to there."

Any sense that CGI characters will be able to replace flesh and blood actors fairly soon, said Smith, is not grounded in practical reality and requires a leap of faith.

On the other hand, there is Moore's Law -- the observation made by Intel co-founder Gordon Moore in 1965 that the number of transistors per square inch on integrated circuits had doubled every year since the integrated circuit was invented, and that the trend would continue for the foreseeable future. The pace slowed down a bit in subsequent years, but data density doubled something like every 18 months.

Most experts, including Moore himself, expect Moore's Law to hold until around 2017, when transistor miniaturization is expected to go as far as physical possibility will allow.

That means, among other things, that filmmakers still have about 15 years to go through the constantly accelerating pace of change that CGI can facilitate -- and actors cannot tell precisely right now how those changes will affect their profession.

Smith would advise them not to worry, but to adapt. In his view, that means developing a new understanding of the essential nature of how they are represented on screen.

Screen representation is a term Smith uses to describe the actor and the image that winds up onscreen, which can be manipulated in all sorts of ways to the point where it's fundamentally different from the actor's real-life image.

A simple example might be the technique studios once employed of building smallish doorways on Western movie sets to make leading men of average or below-average height look like strapping specimens.

A more recent, and much more complex example, showed up in the 2000 feature "The Flintstones in Viva Rock Vegas."

Smith ventured that actors might even enjoy "being freed" from their bodies in such as a way, as they are further separated from their screen representations -- and, consequently, from the acting itself.

"We already separate the actor from acting in animation," he said. "What's not understood generally is that the great animators are actors. They are able to make you believe a line drawing, or a set of polygons in computer animation, is alive and has emotions -- and that Road Runner is outfoxing Wile E. Coyote."

Animated films have freed actors from their bodies for decades -- allowing such box-office champions as Tom Hanks, Mel Gibson, Meg Ryan, Susan Sarandon and Eddie Murphy to create characters without the drudgery of costume fittings or long hours in the makeup chair. But Smith contends that those actors didn't really create those characters.

"People confuse the actor's voice with the animator," said. "I bet a lot of people think Tom Hanks did Woody (the cowboy doll in 'Toy Story'). He didn't. The animator did."

Smith enjoyed a laugh at the irony when he had to concede that even he did not know the name of Woody's animator.

"I know he works for John Lasseter," he said.

As the director of "Toy Story," Lasseter stunned entertainment consumers with the latest thing in CGI -- a high-energy fantasy that featured exceptionally well realized animated characters behaving in ways that movie audiences willingly and gladly bought into, even if the characters were just toys.

Smith said Lasseter hires animators mainly on the strength of their acting ability.

"He doesn't care how they draw or whether they can use computers," said Smith. "He figures if they can act he can teach them how to animate."

At the same time, Smith said, actors need not surrender entirely to animators in the field of character creation.

"The other way to look at it is that actors are animators," he said. "They are special kinds of artists that can animate what happens to be their own body to make you believe they're someone completely different. Currently, those actors are stuck with their own bodies being their screen representations.

That's why Smith advises actors to stay cool and resist the impulse to see CGI as a job killer.

"Instead of freaking out and saying, 'They're going to take away our jobs,'" he said, "the smart ones are looking into who owns their screen representation."

He even thinks the Screen Actors Guild ought to consider admitting animators as members.

In accordance with Moore's Law, the complexity of the computer model and the number of controls it takes to drive the model are constantly increasing. As computers become faster and more powerful, and the cost of computational power continues to fall, the bar is constantly being raised for the level of complexity and sophistication of the characterizations themselves.

Smith said Woody was the most complex job in "Toy Story" with 100 computer controls in his face alone. In the 1999 sequel "Toy Story 2," Al 'Chicken Man' McWhiggin -- the unscrupulous toy collector -- had 1,000 controls in face.

"A convincing human with all the subtleties of a human actor will have hundreds of thousands or millions of controls," said Smith. "You can't throw that at an animator. How do you present a million controls to an artist without him freaking out?"

Producers may be enchanted by the possibility of replacing actors with CGI, but the people who do the imaging are going to put in a lot of hours in the bargain.

"It might be so labor-intensive," said Smith, "that it'll be cheaper just to hire the actors." 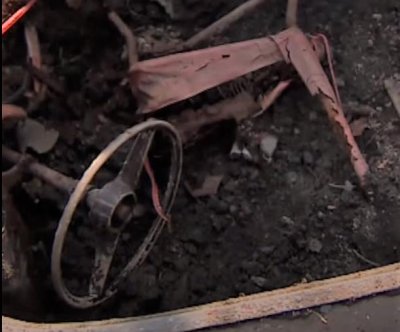 Odd News // 1 hour ago
Firefighters free stag with antlers caught in soccer net
April 10 (UPI) -- Firefighters in Britain responded to a soccer field to rescue a stag found with its antlers entangled in a goal net.

Odd News // 23 hours ago
Police seek owner of lost snake found at gas station
April 9 (UPI) -- Police in Missouri are trying to find the owner of an unusual piece of lost property found at a gas station -- a pet snake.

Odd News // 23 hours ago
Toilet paper roll cakes save Finland bakery from closing
April 9 (UPI) -- A bakery in Finland said it was spared going out of business thanks to a unique creation that went viral on social media: cakes shaped like toilet paper rolls.

Odd News // 23 hours ago
Elephant rescued from 10-foot-deep well in India
April 9 (UPI) -- Wildlife rescuers in India said it took about three hours to safely remove an elephant that fell into a disused farm well. 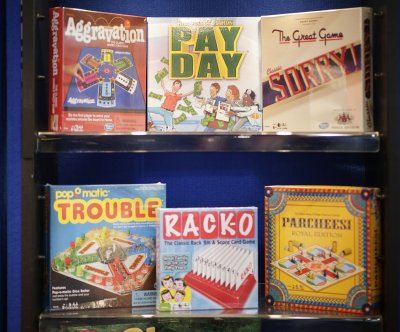 Odd News // 1 day ago
Georgia bar pays unemployed staff with dollar bills stapled to walls
April 9 (UPI) -- A Georgia bar owner said a tradition of customers stapling dollar bills to the business' walls is allowing her to distribute $3,714 to her now out-of-work staff. 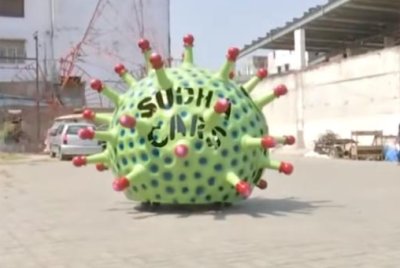 Father and son rescue calf with head stuck in tree