I first became addicted to "Buffy the Vampire Slayer" in the summer of '98, when the WB cleverly scheduled a double whammy of Monday-Tuesday repeat programming. "See the episodes your friends still talk about!" said the ads, and I did. Of course, in my case, the friend I mostly talked about them with was 48 years old.

But I looked for any opportunity to talk about Buffy, the cult hit starring Sarah Michelle Gellar that moved this fall to WB's rival netlet UPN. And usually that meant talking to teenagers.

A financial magazine sent me up to Silicon Valley, where a woman software CEO had funded a summer camp for high-school girls interested in computer science. I looked around at the assembled future software engineers and saw not high-minded feminism in action, but two-dozen people I could definitely discuss Buffy with.

"What's your favorite TV show?" I asked one girl with a 4.5 grade point average, on the pretext of making small talk. "Oh, 'Buffy the Vampire Slayer,' absolutely," she said, "but my mom doesn't always let me watch it. She didn't like the one where they ate the principal."

Because I've been a public school parent here in Los Angeles, with all that implies, I was actually rather gratified by the one where they ate the principal. I realize that statement reveals an immature streak in my personality, but I don't care.

My devotion to "Buffy" and its spin-off, "Angel," starring Buffy's former boyfriend, the vampire-with-a-soul played by David Boreanaz, means that for a couple of hours each week I can happily regress.

Sometimes, I'm afraid, this spreads into life beyond TV-watching. One evening I was putting in my duties as leader at my daughter's Girl Scout troop meeting, which basically involved leaning against the wall, smiling and nodding, as the girls made invitations for some ceremony.

She turned around and stared at me in amused contempt.

"Do you even know who David Boreanaz is?" she asked, her voice dripping with the smugness that comes from winning too many Irish step-dancing contests.

I realize there are people who consider this sort of pertness in 10-year-olds adorable, but I'm not one of them.

"Yes, I know who David Boreanaz is," I said coldly. "In fact, I could be at a WB Halloween party right now, probably talking to David Boreanaz, except that I'd signed up to be meeting leader tonight and so here I am instead, talking to you."

This happened to be perfectly true. I was invited to that night's WB benefit bash -- after I'd heard about it and called up to ask for an invitation, that is -- and was hugely annoyed when a glance at the calendar showed that because of Girl Scouts I couldn't go.

Meghan's jaw had dropped but her eyes were darting back and forth, a sign that she wasn't sure whether to believe me, so I added: "In any case, Spike is much cooler than Angel."

At this point another mom, who was beginning to stare, decided to step in.

"Uh, Cathy, am I going to have to separate you two?" she said.

I am, as you may have gathered, a bit older than the WB and UPN's twenty-something median viewer. But there's something about "Buffy" and "Angel" that make a person enjoy being jejune.

Anyway, when it comes to the TV business, you're as young as you can get away with. It's a sensitive subject, naturally.

"Don't say anything about my age!" implores "Buffy" executive producer (and "Angel" consulting producer) Marti Noxon, who sounds quite young and giggly on the phone. "I try to lack maturity and dress inappropriately." So do I, God knows. Actually, sometimes I don't even have to try.

If you need a brush-up on the "Buffy" backstory, as they say in the biz, here's a recap:

The original 1992 "Buffy the Vampire Slayer" movie was vastly less successful than the TV show, but it did have clever dialogue. Buffy's movie version retort to her patronizing Watcher -- "Does the word 'duh' have any meaning for you?" -- briefly entered the language in the early '90s, even making it onto a t-shirt.

But the superiority of the series to the feature film is something of an object lesson as to why the best writers are abandoning movies these days for TV, where they have more control, make more money and get more respect.

As series creator Joss Whedon, who also wrote the original movie, said of his TV writing: "I may be working on a smaller scale now, but I'm finally getting to tell the story the way I want to."

Spike, introduced as a truly bad (but likeable) British vampire in the second season of "Buffy," now has morphed into a good guy with a naughty attitude.

Unlike Angel, he hasn't regained his soul. But he's been unable to hurt humans ever since a secret, vampire-fighting government operation put a chip in his brain a couple of seasons ago. Plus, he's fallen (unrequitedly) in love with Buffy, once his sworn enemy.

I caught up with Whedon at a UPN party last summer and asked him why Spike is still a soulless vampire if he's now capable of love. Wouldn't that mean he's starting to regain his soul?

"A note Joss gave me last year was, 'A little less Laurence Olivier, a little more Tim Roth,'" Marsters told me. Spike, by the way, isn't British everywhere that "Buffy" airs. The show is so popular in France that fans there once chased Marsters down the street, tearing his clothes and scratching his skin.

"But in France, I'm not British, I'm French," Marsters noted of his punked-out vampire character. "Because the French hate the British. They only think the French are cool."

Alas, now that "Buffy" has moved to UPN and "Angel" is still on the WB, crossover episodes involving Angel, Buffy and Spike look unlikely.

"There's a large number of characters in the 'Buffy" and 'Angel' mythology," Levin said at a WB news conference, "and what Joss has to do now is decide where he's going to plant them."

Whedon originally dealt with "Buffy" and "Angel" as "one big concept instead of two totally separate ones," as he put it. This paid off especially well two years ago, with a seamless flow-through story on "Buffy" and "Angel" introducing Spike's return to Buffy's town of Sunnydale.

"No, prancing away like a magnificent poof is thanks enough," Spike muttered sarcastically, as he watched Angel's post-rescue routine of another damsel in distress. "Besides, I'm almost out of that Nancy Boy hair gel I like so much."

Has "Buffy" changed now that it's on UPN? There seems to be a distinct pandering to the smaller netlet's demographic, which skews heavily toward young men. The season premiere featured a gang of motorcycle-riding demons, and recently the show introduced a trio of geeky young guy characters, similar in spirit to the Lone Gunmen on "The X-Files."

On the other hand, UPN is happy that "Buffy" has brought in new advertisers, like Maybelline and The Gap, attracted by the show's young female viewers. And this raises a question: What with the new mascara commercials and all, is the network that wrestling built in danger of becoming just a little girly?

"We think some of the 'Smackdown!' guys like wearing makeup," joked Dean Valentine when I asked about this. "Actually, we've always said that we were male-friendly, not male-exclusive. We want guys to be the driving force in our network, but we always hoped to attract a much larger compliment of young female viewers."

"'Buffy' was the most male skewing of all the WB shows, and 'Charlie's Angels' was a movie that attracted a huge male audience," Valentine added.

"For some reason, men like to watch women kick guys' butts." 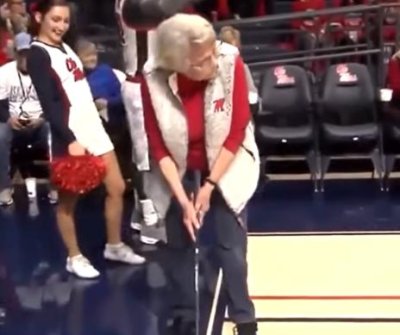