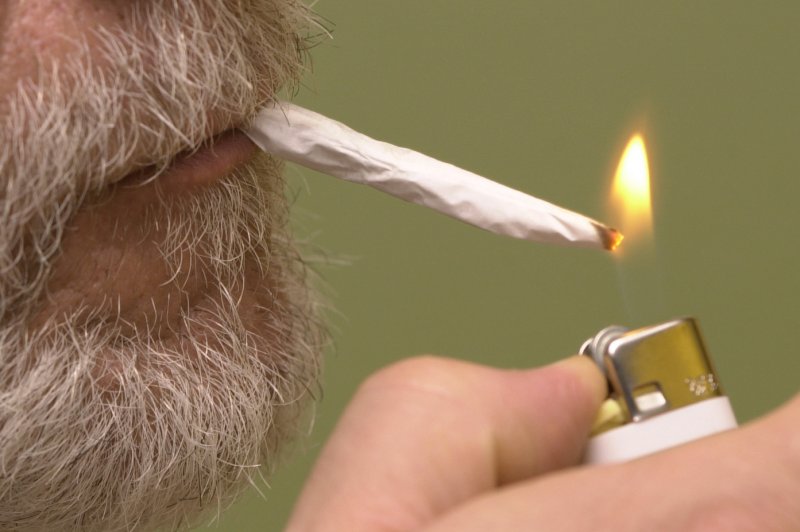 Roughly 75% of weed smokers had emphysema compared to 67% of the tobacco-only smokers and 5% of nonsmokers, a recent study found. File Photo by Christine Chew/UPI | License Photo

While marijuana legalization in some U.S. states and Canada may send a message that weed is harmless, that's not necessarily so, according to a new study that found lung damage was more common in marijuana smokers than tobacco users.

Research into marijuana's impact on the lungs is just getting started, because weed wasn't legal in many places until recently, but early indications are that it could do some serious damage.

"The main message is that it may not be as safe as people think it is, and we need more information," said study co-author Dr. Giselle Revah, a cardiothoracic radiologist and assistant professor at the University of Ottawa in Canada. "This is sort of just the opening. I want people to be aware that it may cause problems."

Revah said it's possible to see that someone is a heavy or longtime cigarette smoker just by looking at their CT scan. She wondered if marijuana, the second most commonly smoked substance after tobacco, would show similar results. She was surprised to find little information existed.

For this study, the researchers compared chest CT results from 56 marijuana smokers, including some who also used tobacco, with 33 who smoked only tobacco and 57 nonsmokers.

Roughly 75% of the weed smokers had emphysema compared to 67% of the tobacco-only smokers and 5% of nonsmokers.

RELATED Pain after surgery may be worse for marijuana users, study shows

And some men who smoked weed had a surprising side effect: 38% had enlarged breast tissue. That compared to 11% of tobacco smokers and 16% of nonsmokers.

Researchers found no difference in calcium buildup in the heart's main arteries between the two smoking groups. But they called the lung findings worrisome.

In emphysema, toxins deposited in small air sacs of the lungs that are responsible for the exchange of oxygen and carbon dioxide cause damage and create irreversible holes.

"You can't ever get normal lung tissue back there and that essentially impairs that gas exchange function," Revah said. "Early on patients may not have any symptoms, but over time as that emphysema progresses, then patients will start to have symptoms: coughing, wheezing, difficulty breathing."

While a majority of people with emphysema smoked at some time, not all smokers get emphysema.

About 20% will, and the more someone smokes, the more the risk rises. It is also affected by genetics and environment, Revah said.

So, why would marijuana smokers' lungs show more damage?

Chalk it up at least in part to differences in how weed and tobacco are used.

Tobacco cigarettes are often filtered, while marijuana is typically smoked without filters. As a result, more particles may be deposited in the airways, Revah said. Weed smokers also tend to take a bigger puff and hold it in longer before exhaling.

"That can lead to micro trauma to those air spaces," she said.

"There's a public perception that marijuana is safe, that it's safer than cigarettes, and this study raises concern that this may not be true," she said. "It could be more harmful than people realize. It may even be causing irreversible damage, but ultimately before we can make any big conclusions, we really need more robust studies."

Edible marijuana shouldn't cause any lung damage, Revah said, but whether it affects other parts of the boday hasn't been studied.

"We know that marijuana smoke contains the same carcinogens and toxins and tar that cigarette smoking does, but we really don't have long-term studies that are similar to tobacco-related studies because marijuana has not been able to be studied because of its illegal nature, the fact that many people don't admit to what they're smoking and many people smoke both marijuana and tobacco," Rizzo said. "So, it's hard to sort out what is causing what."

Even as states legalize marijuana, some people will get it from sources other than a legalized dispensary and that po may have contaminants, Rizzo said.

He noted that many people use marijuana for medical reasons. For his own patients, he recommends alternatives to smoking it -- or anything else. People who find they get more relief by smoking should do so only under a doctor's care and supervision, he said.

"We may not know for 10, 15, 20, 30 years whether or not smoking marijuana by itself leads to lung cancer," Rizzo said. "We didn't know that for tobacco for a long, long time and that's the concern that we would have."

The findings were published Tuesday in Radiology.

The U.S. National Library of Medicine has more on emphysema.

Many nervous patients show up for dental appointments while high

Health News // 12 hours ago
Living near busy traffic may raise odds for tinnitus
People who live near traffic noise, especially when it continues at night, are more likely to develop the repetitive whistling or buzzing sounds in their ears known as tinnitus.

Health News // 19 hours ago
Those who return to work after loss of spouse may face increased challenges
People who returned to work within three months of losing a spouse had higher perceived stress levels and greater systemic inflammation than retirees who had lost their partner, a new study found.

Health News // 20 hours ago
Asking teens about suicide may raise odds they'll get help
Teens who were asked about their thoughts of self-harm were seven times more likely to be identified at-risk for suicide, and four times as likely to initiate treatment, a new study found.