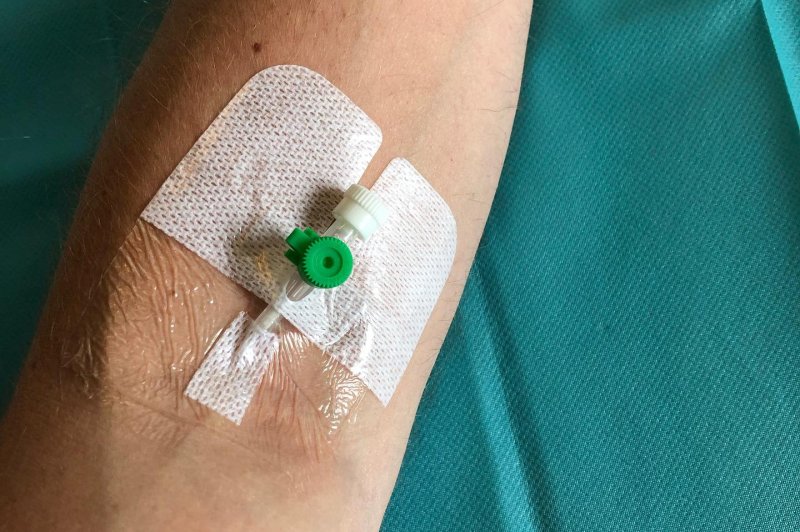 Only two studies -- both inconclusive -- have investigated whether vitamin injections have any benefit for otherwise healthy individuals. Photo by madslumholdt/Pixabay

Pro athletes appear to be regularly turning to intravenous (IV) nutritional drips to alleviate fatigue and speed recovery, despite the potential risks and without solid proof of any real benefit.

Normally, such needle-inserted drips are supposed to be reserved for treating a serious illness like anemia, or in an emergency situation such as severe dehydration.

Unless an exemption is granted for medical necessity, the World Anti-Doping Agency limits IV transfusions over 100 mL (3.38 ounces). Without such an exemption, the Olympics bars them.

But not all sports leagues have such restrictions, according to an editorial published Tuesday in the British Journal of Sports Medicine. And the result has been the rise of pre- or post-game "IV drip bars," in which sports doctors or nurses pump B and C vitamins, amino acids and/or electrolytes into athletes seeking a competitive edge.

"There is no clear evidence that this works," said study author Charles Pedlar. "And on the contrary, there may be negative effects."

A professor of applied sports and exercise science at St. Mary's University in Twickenham, near London, Pedlar points to a number of downsides: "By doing this athletes are putting themselves at risk of an infection; [there are also] unknown negative effects of pushing nutrients in their bodies to very high, supra-physiological levels; and the risk of violating an anti-doping test."

In "extreme circumstances," such drips may have a role, he noted.

But only two studies -- both inconclusive -- have investigated whether vitamin injections have any benefit for otherwise healthy individuals. And none has tracked the long-term effects -- good or bad -- that a regular use of drips might have on healthy athletes, Pedlar added.

That makes it "very hard to make a case for routine use of IV nutrition," he said.

Pedlar and his international colleagues say it is not clear just how widespread the practice is.

But the authors -- who variously work in professional athletic training centers, hospitals and universities -- noted there is plenty of anecdotal evidence suggesting that IV nutritional drips have become routine in the sports world.

"Companies are offering this service directly to athletes promising some kind of positive outcome, such as enhanced hydration status and faster recovery," Pedlar said.

In large part, the drips fall into what he described as a legal "gray area," with restrictions varying by sport and what's contained in a drip. He called on sports governing bodies to steer athletes away from the practice.

And Pedlar offered this advice to athletes and their handlers: "Stick to food, consumed orally."

That advice is strongly seconded by St. Louis-based nutrition consultant Connie Diekman, former president of the Academy of Nutrition and Dietetics.

"As a sports dietitian, the comments I would always hear were 'how do I get a competitive edge, how do I recover more quickly, what can allow me to perform better?'" she noted. "And unfortunately those comments would often lead athletes to the 'magic' [fix]. The perception with IV nutrition is that nutrients can be absorbed more quickly, thus -- in theory -- helping the athlete perform or recover faster."

The question is: Does IV nutrition do that?

Plus, there's reason to think that the practice carries potential risk on the one hand, or is a complete waste of time and money on the other, she added.

Diekman pointed to evidence suggesting that risky cross-nutrient interactions may be exponentially stronger because IV-ingested nutrients bypass the stomach and liver and enter the bloodstream directly.

"The stomach and liver work to control absorption and filtering of toxins, [and] using an IV misses that step leading to the potential for toxicity," she explained.

And, Diekman added, if the body doesn't require as much of a nutrient as the IV contained, it will excrete the excess. The result is "expensive urine," she added.

Diekman advises athletes to focus first on food for their nutritional needs, developing a plan with a sports dietitian to fuel for best performance and recovery.

"Finally, know what supplements and drugs are banned by your sport," and check with your trainer or dietitian before taking anything, she concluded.

The University of Wisconsin School of Medicine and Public health has more about athletes and nutrition.

Health News // 1 hour ago
Study examines brain structure that may help 'super-agers' stay sharp
Researchers have discovered another clue as to how some older people stay sharp as a tack into their 80s and beyond: Their brain cells are really big.

Health News // 2 hours ago
Eating refined grains may bring on heart disease earlier, study says
Oct. 3 (UPI) -- Eating lots of refined grains, such as white bread and white rice, is similar to consuming a diet full of sugars and oils, and linked to a higher risk of premature coronary artery disease, a new study says.

Health News // 2 hours ago
Cancer patients may be at greater risk of death from COVID-19
New research confirms that COVID-19 can be life-threatening for cancer patients: More than 16,500 Americans with cancer died from complications related to coronavirus infection during the first 10 months of the pandemic.

Health News // 3 hours ago
COVID-19 boosters key to maintaining seniors' immunity, study confirms
For older adults, getting vaccinated provides protection against COVID-19, but getting a booster is a key part of maintaining that immunity, a new study confirms.

Health News // 6 hours ago
Black patients left out of most Alzheimer's drug trials
When it comes to Alzheimer's medications such as donepezil (Aricept) or aducanumab (Aduhelm), the evidence on how they work for Black and Hispanic patients is lacking because so few were included in clinical trials.