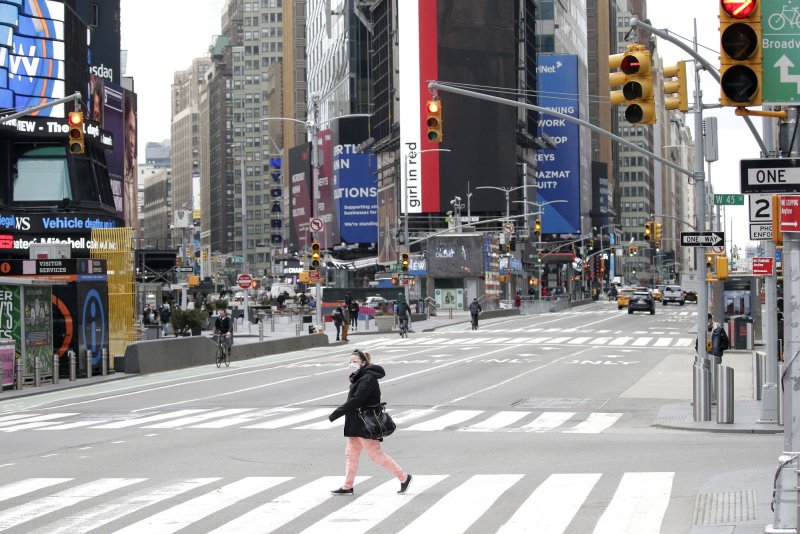 An estimated 7,485 pedestrians were killed in 2021, which was 12% more than in 2020, preliminary data show. File Photo by John Angelillo/UPI | License Photo

U.S. pedestrian deaths in 2021 were the highest in four decades, with an average of 20 deaths every day, according to the Governors Highway Safety Association.

The findings are "heartbreaking and unacceptable," said Jonathan Adkins, executive director of the highway safety association.

"The pandemic has caused so much death and damage, it's frustrating to see even more lives needlessly taken due to dangerous driving," he said in an association news release.

The reasons are clear: There has been an increase in speeding, impaired, distracted driving and other dangerous driving behaviors in recent years, according to the association's report.

"We must address the root causes of the pedestrian safety crisis -- speeding and other dangerous driving behaviors, inadequate infrastructure, and roads designed for vehicle speed instead of safety -- to reverse this trend and ensure people can walk safely," Adkins said.

The report also included an analysis of 2010 to 2020 data from the National Highway Traffic Safety Administration. That showed that the percentage of pedestrian fatalities involving speeding rose to 8.6% in 2020 from 7.2% in 2019.

The percentage of pedestrian deaths among children younger than 15 in which speeding was a factor more than doubled between 2018 and 2020, from 5.8% to almost 12%. Most of these fatalities occurred on weekdays and during daylight hours, which is when children would typically be going to and from school and related activities.

Most pedestrian fatalities occur at night. In 2020, more than three-quarters of deaths with a known lighting condition were at night.

There may have been a sliver of a silver lining, though: Pedestrian deaths fell by 8% in America's 10 largest cities in 2020 after years of increases, likely because there were fewer people walking and driving due to public health restrictions during the COVID-19 pandemic, according to the highway safety association.

Signs warning of highway deaths may cause more crashes

Health News // 9 minutes ago
Cancer survivors at greater risk for heart disease, study shows
If you survive cancer, you're more apt to have heart trouble later on, a new study shows.

Health News // 3 hours ago
Many parents are lax on fireworks safety to protect kids
Many U.S. parents don't take proper precautions to protect their children from fireworks-related burns and injuries, claims a new survey released just ahead of the Fourth of July.

Health News // 6 hours ago
Newly identified gene may be reason women have greater risk of Alzheimer's
WASHINGTON, June 30 (UPI) -- New research has identified a novel gene for Alzheimer's disease in women, furthering efforts to explain why the disease is more prevalent in females than males.

Health News // 22 hours ago
Using inflatable neck rings in water can seriously injure infants, FDA warns
Neck floats marketed for babies to use in water can lead to serious injury or death, the U.S. Food and Drug Administration warned this week.

Health News // 1 day ago
Strain of MRSA 'superbug' in pigs can jump to humans
A strain of the superbug MRSA has emerged in pigs that is highly resistant to antibiotics and a growing cause of human infections.
Advertisement