Survey: Many parents give supplements to counter kids' balking at balanced diet

Up to half of parents try supplements to improve their child's diet health, according to a new survey. Photo by Mark Buckawicki/Wikimedia Commons

April 18 (UPI) -- More than half of parents in the United States say that it's difficult to get children to eat a balanced diet, and half report that they regularly give them dietary supplements, according to a survey released Monday.

About one-third of responding parents described their child as a picky eater and roughly one-third believe their offspring do not eat enough fruits and vegetables, the survey released Monday by the University of Michigan Health C.S. Mott Children's National Poll on Children's Health found.

In addition, 13% worried that their kids are not getting enough of certain vitamins and minerals, while 9% said their children needs more fiber in their diet, according to data based on responses from 1,251 parents with at least one child ages 1 to 10 years.

To compensate, many parents polled said they give their children dietary supplements, with more than 75% of them opting for multivitamins, the researchers behind the poll said.

Nearly half also provide kids with probiotics, which are live bacteria and yeast supplements designed to help digestion by enhancing the quantity of good microbes in the gut, they said.

More than 20% indicated they have used omega-3 supplements -- fatty acids that support cell growth and brain development, according to the researchers.

"A balanced diet helps children get the nutrients they need for healthy growth and development," Mott Poll co-director Sarah Clark said in a press release.

"An unhealthy diet, on the other hand, can negatively affect short and long-term health outcomes as well as school performance," she said.

Nearly 30% of adolescents and teens in the United States have prediabetes, or signs of difficulty processing sugars that are often a precursor of Type 2 diabetes later in life, recent research estimates.

In addition, nearly one in five children nationally meets the criteria for obesity, or being severely overweight, according to the Centers for Disease Control and Prevention.

Although some children are selective or "picky eaters," studies suggest, one barrier to a healthy diet among young people may be cost, the Mott poll researchers said.

Half of the responding parents agreed that it was more expensive to provide their children with a healthy diet, the data showed.

About one-third of parents surveyed say their children have tried -- but do not take -- supplements regularly, while four in five indicate they chose products made specifically for children, though only half of them discussed supplement use with their child's healthcare provider, the researchers said.

Parents in lower-income households were less likely to talk about supplement use with a child's healthcare provider compared to higher-income parents, according to the survey.

Supplements are classified by the Food and Drug Administration as food, so they do not receive the same premarketing evaluation and review as medications, Clark and her colleagues said.

"We know that fresh, healthy foods can be more expensive than processed or packaged items that are often higher in sodium and added sugars," Clark said.

"Still, the reality for many parents is that getting children to eat healthy foods isn't always easy [and] our poll finds that many turn to dietary supplements as a solution but may not always consult with a health provider," she said.

Health News // 6 hours ago
Asthma, allergies may increase risk for heart disease
If you have asthma or allergies, you may be more likely to develop heart disease, and some medications may increase or lower that risk, a new review of clinical trials and lab research shows.

Health News // 8 hours ago
Cancer drug may treat severe COVID-19, study finds
May 18 (UPI) -- Patients with severe COVID-19 who received the cancer drug imatinib were less likely to die than those not treated with it. 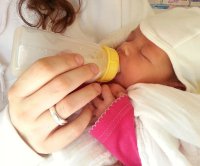 Health News // 8 hours ago
Doctors warn parents not to dilute infant formula
As the United States faces critical shortages of baby formula, parents are being cautioned against watering down formula in an effort to stretch out what they have.
Advertisement