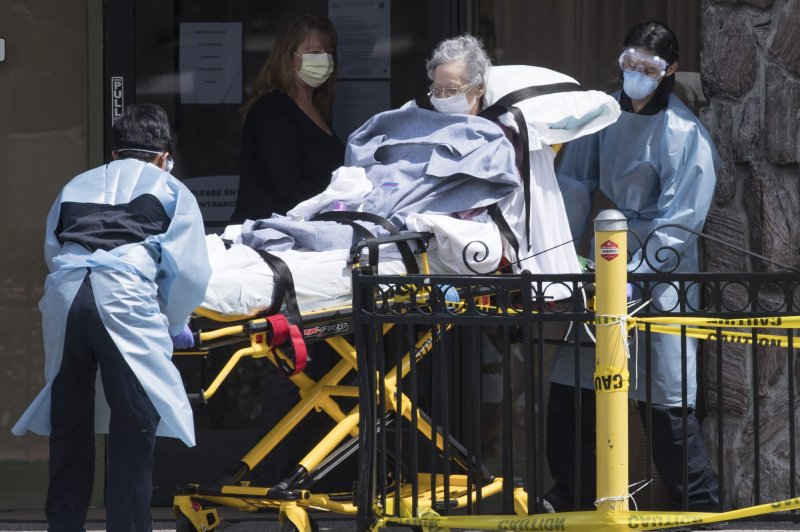 A new study shows that COVID-19 can spread easily through nursing homes, even if most residents have been fully vaccinated, which researchers said is at least partially due to varying immune responses in older people. File Photo by Terry Schmitt/UPI | License Photo

Sept. 13 (UPI) -- Fourteen elderly residents of a French nursing home developed COVID-19 during an outbreak at the facility, despite being fully vaccinated against the virus, a study published Monday by JAMA Network Open found.

The outbreak affected one in five of the fully vaccinated residents of the facility and also included two who were partially vaccinated -- they had received one dose of the two-shot Pfizer-BioNTech vaccine -- and one who was not vaccinated, the data showed.

Of the 17 total residents infected, eight developed severe illness, two were hospitalized and one -- the person who had not been vaccinated -- died.

All of the cases involved the Alpha, or "U.K.," variant, researchers said.

"The immune response to this vaccination is likely diminished in nursing home residents due to aging and [chronic conditions] that impair immune function," study co-author Dr. Joël Belmin told UPI in an email.

"Although some studies have shown that the antibody response to [COVID-19] vaccination is quite good, the duration of this response and the cellular immune response are poorly known in this population.," said Belmin, a professor of cardiovascular and geriatric services at the Sorbonne in Paris.

A study published in April by the journal Clinical Infectious Diseases found that nearly one in three adults age 60 and older who were fully vaccinated against COVID-19 had no detectable antibodies against the virus.

Antibodies are cells produced by the immune system that fight off infections.

Conversely, just over 2% of adults age 60 and younger in the study had undetectable antibodies, the data showed.

In addition, research published by the Lancet in March suggests that older adults who are infected with the virus are more likely to catch it again than younger adults, who remain immune following exposure for longer periods of time.

For this study, Belmin and his colleagues assessed the impact of a COVID-19 outbreak at a Paris-area nursing home with 74 residents age 80 and older.

At the time of the outbreak, 70 of the 74 residents were fully vaccinated with the Pfizer-BioNTech vaccine, while two were partially vaccinated, meaning they had received one dose of the two-shot vaccine.

Two of the nursing home residents were not vaccinated, according to the researchers.

Along with the outbreak among residents, 12 of the 102 facility staff members also were infected, the data showed.

However, only one-third of the staff was fully vaccinated at the time of the outbreak, the researchers said.

Of the 12 cases, nine occurred in unvaccinated staff members, according to the researchers.

None of the infected staff members developed serious illness, they said.

"Outbreaks can occur in nursing homes, even if residents are fully vaccinated," Belin said.

Still, "it is important that staff members, visitors and family members of residents in contact with them also be vaccinated against COVID-19," he said.

Health News // 32 minutes ago
Researchers: Refer patients for COVID-19 testing based on 7 symptoms
Sept. 28 (UPI) -- Seven symptoms can be used to diagnose COVID-19, particularly in areas in which testing kits are in short supply, an analysis published Tuesday by PLOS Medicine found.

Health News // 3 hours ago
Epidural use during delivery linked to minimal autism risk, studies find
Sept. 28 (UPI) -- Using an epidural for pain management during childbirth does not significantly increase newborns' risk for later developing autism spectrum disorder, according to the authors of two separate studies published by JAMA.

Health News // 11 hours ago
Experts: COVID-19 infection offers less protection than many think
It seems like common sense for people who've had COVID-19 to think they now have natural immunity, and don't have to bother getting vaccinated. Common sense, yes, but also incorrect, infectious disease doctors say.

Health News // 23 hours ago
Study: Delay on graphic warning labels on cigarettes may have cost lives
Around 179,000 deaths in the United States might have been prevented over the past decade if smokers had been forced to confront graphic images every time they reached for a pack of cigarettes, a new study suggests.