Study: Protein may predict response to immunotherapy in breast cancer

Researchers have found that the presence of a specific molecule may be an indicator of whether those with the disease will respond to immunotherapy. Photo by Nevit Dilmen/Wikimedia

July 27 (UPI) -- The presence of a specific molecule in breast cancer tumors may serve as an indicator of potential response to treatment with immunotherapy drugs, a study published Tuesday by Clinical Cancer Research found.

Tumors with the molecule, or Major Histocompatibility Complex Class II protein, are more likely to respond well to immunotherapy, which is designed to boost the body's immune system to fight cancer, the researchers said.

This is true for both early-stage, triple-negative and high-risk, estrogen receptor-positive breast cancer, two common forms of the disease, they said.

The findings suggest that the protein may be a a biomarker -- a measurable substance that can assist diagnosis and treatment of a disease -- for immunotherapy in these forms of breast cancer.

The protein already plays a similar role in the treatment of melanoma, or skin cancer, the researchers said.

"Immunotherapy holds great promise in helping breast cancer patients live, [but] with the currently available medications, clinical trials have shown only about 10% to 20% of ... patients actually benefit," study co-author Justin Balko told UPI in an email.

"Since these drugs, like any drugs, come at possible risk of side effects, we need better ways to personalize therapy and use these drugs in only the patients they will actually help," said Balko, an associate professor of medicine at Vanderbilt University in Nashville.

Breast cancer is the second-most common cancer in women in the United States, after skin cancer, according to the American Cancer Society.

More than 280,000 women are diagnosed with the disease annually, and more than 43,000 die from it each year, the society estimates.

Immunotherapy drugs are designed to block the production of certain proteins, thereby strengthening the immune system to help fight off cancers.

They are usually administered in combination with chemotherapy, it says.

For this study, Balko and his colleagues analyzed breast tissue samples collected via biopsies from 582 patients with confirmed breast cancer.

Their tissue samples were analyzed using ImmunoHistoChemistry, or IHC, a standard test designed to determine whether cancer cells have hormone receptors on their surfaces

Testing for the presence of Major Histocompatibility Complex Class II could shield breast cancer patients who don't need the immunotherapy from possible treatment complications and additional costs, they said.

"Our study shows that a simple IHC test may do this job very effectively and could help reduce unnecessary side effects in patients and therapy costs," Balko said.

"In the short term, these findings will help encourage oncologists running clinical trials with immunotherapy to test [for] the biomarker in more patients to get a better idea of how reliable it is," he said.

Health News // 6 hours ago
Brighter outlook on aging may buffer against physical effects of stress
People who believe their bodies and minds will break down with age may be creating a self-fulfilling prophecy, a recent study suggests.

Health News // 6 hours ago
Study: Blood tests assessed via machine learning can predict COVID-19 survival
Jan. 18 (UPI) -- Blood samples collected from patients with severe COVID-19 can be analyzed by a machine learning approach to predict whether they will recover and survive or die from the disease, a PLOS Digital Health study found. 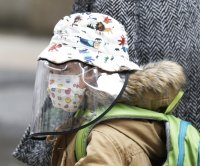 Health News // 7 hours ago
Chronic conditions increase risk of severe COVID-19 in children
As a record number of American kids are being hospitalized with COVID-19, a new study helps clarify which ones are at the highest risk for serious complications. 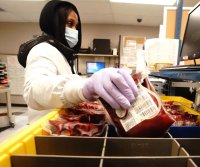 Health News // 19 hours ago
Pressure mounts to ease blood donor rules for gay men
A three-month sexual abstinence rule for blood donations from sexually active gay and bisexual men should be dropped by the U.S. Food and Drug Administration, critics urge as the country struggles with a blood shortage.