July 19 (UPI) -- People infected with COVID-19 continue to produce antibodies against the virus for up to nine months, whether or not they experienced symptoms, a study published Monday by Nature Communications found.

Just under 99% residents of Vo, Italy -- which saw a high volume of cases in the early stages of the pandemic -- who were infected in February or March of last year still had antibodies against the virus in November, the data showed.

Levels of antibodies, which are cells produced by the immune system to fight off viruses, declined over the entire nine months -- but they did not vary between people who had symptoms of COVID-19 and those who had been symptom-free.

"We found no evidence that antibody levels between symptomatic and asymptomatic infections differ significantly," study co-author Ilaria Dorigatti said in a press release.

This suggests "that the strength of the immune response does not depend on the symptoms and the severity of the infection," said Dorigatti, a research with the MRC Center for Global Infectious Disease Analysis at Imperial College London in England.

The findings are based on blood samples collected from 85% of the roughly 3,000 residents of Vo.

All of the people included in the study were tested for antibodies against the virus in February and March, 2020, when Italy was one of the epicenters of the pandemic, and then again in May and November of last year, the researchers said.

Results from the testing in May indicated that about 4% of the village population had been exposed to the virus, even though many of them were asymptomatic and, thus, unaware, the data showed.

Antibody levels were tracked using three assays, which are tests that detect different types of antibodies that respond to different parts of the virus.

Although antibody types showed some decline between May and November, the rate of decay was different depending on the assay used.

In addition, in some study participants, antibody levels increased over time, suggesting potential re-infections with the virus, providing a boost to the immune system, the researchers said.

How long previous infection protects people from COVID-19 has been a point of debate within the scientific community, but most studies suggest virus-based immunity lasts at least three months.

Conversely, the immunity offered by the vaccines from Pfizer-BioNTech and Moderna may last for years, research indicates.

"Our study does show that antibody levels vary, sometimes markedly, depending on the test used," Dorigatti said.

"It is clear that the epidemic is not over, neither in Italy nor abroad, [so] moving forward, I think that it is of fundamental importance to continue administering first and second vaccine doses as well as to strengthen surveillance including contact tracing," she said.

Health News // 24 minutes ago
Suicide warnings on anti-seizure meds may not be needed, study says
Since 2008, anti-seizure drugs have carried a warning that they may increase users' suicide risk. But a new analysis finds no evidence of such a risk with newer medications.

Health News // 2 hours ago
Study: Farming practices, changing diets causing more in U.S. to be anemic
Growing numbers of Americans aren't getting enough iron in their diets most likely due to changes in farming practices and a shift away from red meat, researchers report.

Health News // 11 hours ago
Study: Early signs of COVID-19 may differ by age, gender
Exactly what symptoms of early COVID-19 infection you suffer may depend on both your age and gender, a new study finds. 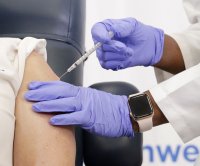 Health News // 12 hours ago
Arthritis, lupus flares rare after COVID-19 vaccination, study finds
Aug. 4 (UPI) -- The COVID-19 vaccine rarely causes flares in people with rheumatoid arthritis and lupus, according to a study published Wednesday by the journal Arthritis and Rheumatology.

Health News // 16 hours ago
Study: Graphic warnings on cigarettes boost desire to quit, but only for short time
Aug. 4 (UPI) -- Graphic warning labels on cigarette packaging designed to depict the dangers of smoking lead some users to quit in the short term, but have little effect over the long haul, a study published by JAMA Network Open.

Health News // 1 day ago
Cancer surgery at leading hospitals up to 30% more expensive, study finds
Aug. 3 (UPI) -- Choosing a leading research institution for cancer care comes with a cost, according to a study published Tuesday by JAMA Network Open.
Advertisement