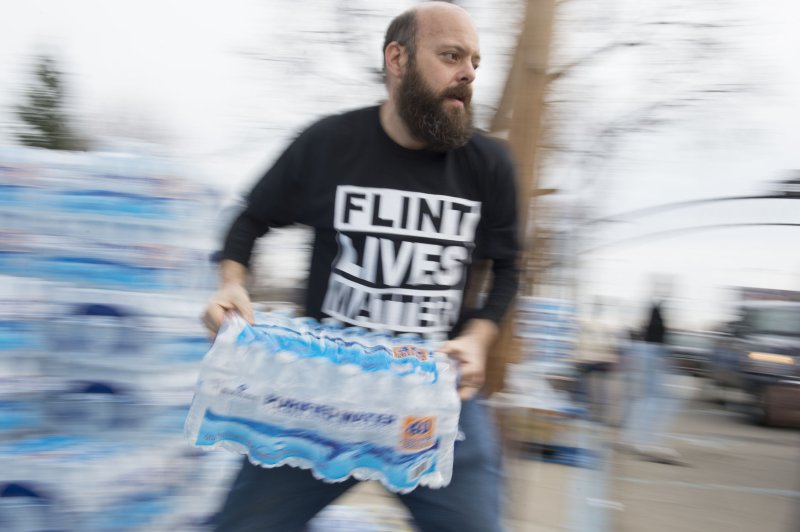 Volunteers distribute cases of water at City Hall in Flint, Mich., in 2016 after the drinking water was found to be contaminated with lead. File Photo by Molly Riley/UPI | License Photo

No amount of lead in drinking water is safe for people with kidney disease, a new study warns.

Low levels of lead in drinking water are widespread in the United States. These findings suggest that U.S. Environmental Protection Agency rules on allowable lead levels in drinking water pose a risk to the 30 million to 40 million Americans with kidney disease.

"While drinking water may seem uniformly healthy, low levels of lead contamination found in the majority of drinking water systems in the United States may have toxic effects for those with chronic kidney disease," said lead author Dr. John Danziger, of Beth Israel Deaconess Medical Center in Boston.

The findings will appear in an upcoming issue of JASN.

"More rigorous efforts to improve the water system infrastructure may be needed to protect individuals from [this] unrecognized hazard," Danziger added.

The study authors analyzed health data from nearly 600,000 people in the United States who began kidney dialysis between 2005 and 2017. They also examined EPA data on lead concentrations in community water systems in the five years before the patients started dialysis.

The researchers focused on the potential effects of lead on levels of hemoglobin, the oxygen-carrying protein in red blood cells that's affected by lead poisoning.

Patients in cities with detectable levels of lead in their community's water had significantly lower hemoglobin concentrations before starting dialysis and during the first month of dialysis. They also received higher doses of medications to treat anemia, which occurs when red blood cell counts or hemoglobin levels are lower than normal.

These associations occurred at lead levels below the EPA's lead/drinking water threshold for regulatory action, according to the study.

The study also found that Black patients were exposed to higher lead levels in drinking water than White patients.

"Combined with the increased susceptibility to kidney disease among Blacks, this represents an important environmental injustice," Danziger said.

The U.S. National Institute of Diabetes and Digestive and Kidney Diseases has more on kidney disease.