The COVID-19 vaccine made by Moderna produces an immune system response at least 6 months after the second dose of the two-dose shot is given, according to data published Tuesday. File Photo by Ian Halperin/UPI | License Photo

There's good news for the millions of Americans who've already received a dose or two of Moderna's COVID-19 vaccine: New research shows the vaccine should protect against illness for at least six months.

The new study tracked 33 participants in the trials that led to the vaccine's approval. Six months after having received their second vaccine dose, "antibody activity remained high in all age groups," according to a team led by Nicole Doria-Rose of the U.S. National Institute of Allergy and Infectious Diseases.

Her group published their findings Tuesday in the New England Journal of Medicine.

The reassuring results follow on similar findings for the other major two-dose vaccine included in the U.S. vaccine rollout, made by Pfizer-BioNTech. Trial results released April 1 by the companies found that their vaccine remains more than 91% effective six months after people get their second dose.

The new results from Moderna are based on 33 people ranging in age from 18 to older than 71.

The study found that while everyone maintained high levels of infection-fighting immune system antibodies in blood samples, levels did seem to fall according to the increasing age of participants.

Still, all participants "had detectable [antibody] activity" six months on, and that was found on three distinct types of blood tests, the NIAID-led team said.

Dr. Amesh Adalja is an expert in virology and senior scholar at the Johns Hopkins Center for Health Security, in Baltimore. Reviewing the new report, he said that immunity might last even longer than the six-month period the researchers were able to report on now.

RELATED Public trust in CDC drops across all demographics during pandemic

In the meantime, Doria-Rose and her colleagues said that "ongoing studies are monitoring immune responses beyond six months as well as determining the effect of a booster dose to extend the duration and breadth of activity against emerging viral variants."

There's more on COVID-19 vaccination at the U.S. Centers for Disease Control and Prevention. 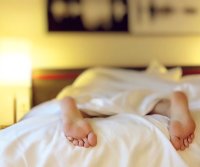 Health News // 1 hour ago
Listening to sedative music improves sleep in older adults, study finds
April 21 (UPI) -- Older adults who listen to music at night sleep better than those who don't, according to an analysis published Wednesday by the Journal of the American Geriatric Society.

Health News // 9 hours ago
Study: Proper fit crucial for masks to work, even when wearing two
Two snug, well-fitted face masks can significantly reduce your risk of COVID-19 infection -- but a good fit is key. A new study found that two ill-fitting cloth masks aren't as good as one snug-fitting surgical mask.

Health News // 11 hours ago
Study links sleepwalking to higher odds for Parkinson's in men
Men with certain sleep problems, like sleep walking, may be at a higher risk of developing Parkinson's disease, a new study suggests.

Health News // 1 day ago
Study spots genetic mutations linked to rare heart disorder in pregnant women
April 20 (UPI) -- Genetics may explain why some younger women develop a heart ailment during pregnancy that is more typically found in middle-aged adults, according to a study published Tuesday by the journal Circulation.

Health News // 1 day ago
Obesity increases odds for breast cancer return in survivors, study says
Most people know obesity can lead to diabetes or heart disease, but excess weight can play a role in cancer, too, researchers say.