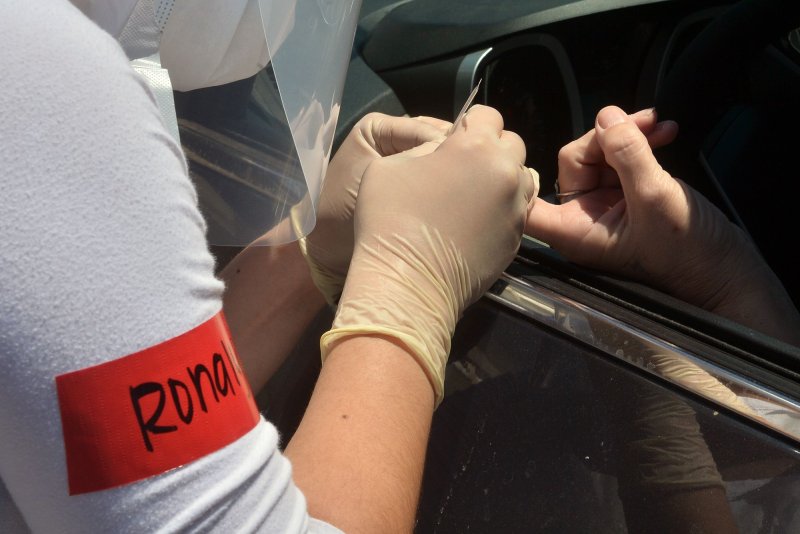 Twice as many people may have been infected with COVID-19 than previously estimated by the U.S. Centers for Disease Control and Prevention, a new study suggests. File Photo by Jim Ruymen/UPI | License Photo

March 16 (UPI) -- Up to 16 million people in the United States may have had undiagnosed, asymptomatic COVID-19 as of September 2020 -- twice as many as previously estimated -- an analysis published Tuesday by JAMA Network Open reported.

Just under 7% of about 62,000 people in the United States with no symptoms of infection tested in the study had antibodies against the virus, the data showed.

Antibodies are cells produced by the immune system to fight off infection, and their presence in blood suggests that people either are battling the virus or were recently.

The nearly 16 million asymptomatic cases is more than twice the number of confirmed cases -- about 7.5 million -- reported in the United States by the Centers for Disease Control and Prevention at the end of September.

"As of September, the scope of the pandemic was about double the number of reported cases," study co-author Dr. Robert L. Stout told UPI in an email.

"The primary means of transmission of this virus is the asymptomatic population -- the patient [who] is unaware of their infectious status and is therefore at risk of unknowing spreading the virus," said Stout, a researcher with Lenexa, Kansas-based Clinical Reference Laboratory. The company that specializes in health testing for life insurance applicants.

Since the start of the pandemic last March, public health officials and researchers have suggested that the number of cases and deaths linked with the virus, both in the United States and globally, may be undercounted.

This is due to the number of infected people who may experience no symptoms, believed to be up to 80% of those with the virus, experts say.

For this study, Stout and his colleagues tested 61,190 life insurance applicants for antibodies to the coronavirus in September, using blood samples collected as part of the application process.

None of the applicants reported having symptoms of COVID-19. Just under 4,100, or 6.7%, tested positive for coronavirus antibodies, and about 56% of them were male, researchers said.

Most of those who tested positive for antibodies were in their late 30s or early 40s, which researchers say is significant given that younger people are believed to be at lower risk for serious illness, or symptoms, from COVID-19.

These people may be unknowingly driving spread of the virus, the researchers said.

"Quite simply ... they think that everything is fine and continue to go about their normal activities," Stout said.

"Some practice recommended CDC guidelines in public places while some may not," he said.