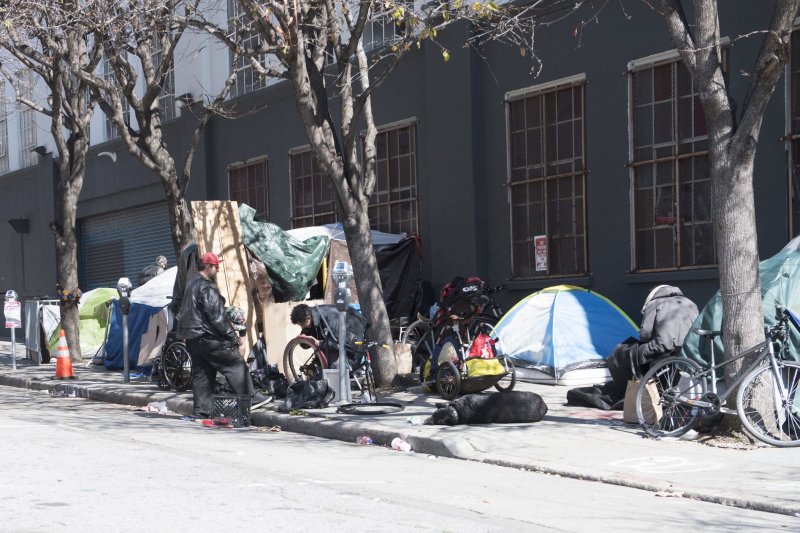 Isolating and quarantining homeless people in hotels during the pandemic can reduce their risk and limit strain on hospitals, a study in San Francisco found. File Photo by Terry Schmitt/UPI | License Photo

The practice enabled some homeless patients to avoid hospitalization and reduce the length of hospital stays for others with confirmed infections, reducing the strain on the health system as cases rose, the researchers said.

"People experiencing homelessness and those who are marginally housed are particularly vulnerable to the spread of COVID-19," study co-author Dr. Jonathan Fuchs told UPI.

"We recognized early on during the pandemic that alternative care sites outside of the hospital were needed to support individuals with confirmed or suspected COVID-19 who had mild to moderate symptoms and couldn't safely isolate at home," said Fuchs, director of the Center for Learning and Innovation Population Health Division at the San Francisco Department of Public Health.

Risk for COVID-19 among homeless populations appears to be high, including those who reside in conventional shelter facilities, with 36% of more than 400 residents in a Boston shelter testing positive for the virus in a study published in April of last year.

Homeless people are believed to be at increased risk for infection due to their inability to quarantine and their lack of access to healthcare, according to Fuchs and his colleagues.

The United States needs an estimated 400,000 beds to provide socially distanced accommodations for its homeless population to limit the spread of the virus, according to an analysis published in September 2020.

The new study focuses on more than 1,000 homeless people who participated in a hotel-based isolation and quarantine system set up by Fuchs and his colleagues between March 19 and May 31.

By May 31, there were more than 2,500 confirmed cases of COVID-19 in San Francisco, and hospitals in the city were experiencing a crush of patients.

RELATED CDC orders moratorium on evictions through end of December

The program is ongoing and has helped more than 3,300 homeless people, according to health officials.

Among 346 participants transferred from the county hospital following infection, only 13, or 4%, were readmitted to the hospital for worsening COVID-19 symptoms after hotel-based isolation and quarantine.

For those who required hospitalization, the average length of time spent in the hospital declined as the hotel-based isolation and quarantine program was implemented, to 2.7 days in May from 5.5 days in March.

"We found that this integrated medical and behavioral health model of care helped a majority of [the] guests cared for during that period [and] we also showed it was safe," Fuchs said.

"Hospital capacity was preserved, in part, due to the fact that people experiencing homelessness without severe COVID-19 symptoms ... could be referred to the hotels rather than be hospitalized," he said.

The findings suggest that cities with large homeless populations could use a hotel-based isolation and quarantine program to limit the spread of the disease and reserve hospital beds only for those who truly need them, according to Fuchs and his colleagues.

"The COVID-19 pandemic has widened existing health disparities among vulnerable populations in the U.S., which will only worsen in the face of rising unemployment and threatened evictions," Fuchs said.

"Ongoing support for alternative care sites, like the isolation and quarantine hotels, are needed to help those with mild to moderate COVID-19 who can't safely self-isolate recuperate and prevent ongoing community transmission," he said.

Health News // 7 hours ago
In rare cases, COVID-19 vaccines cause reactions for those with facial fillers
In rare cases, people who've had face-plumping filler injections can develop a mild, temporary swelling at the site of the filler after getting their COVID-19 shots.

Health News // 9 hours ago
Some blood pressure meds may increase skin cancer risk, study says
A new Canadian study finds that for people who take certain blood pressure medications, that advice becomes even more critical because those drugs can increase their sensitivity to the sun's harmful ultraviolet rays.

Health News // 17 hours ago
Younger U.S. adults three times likelier to die early than peers in Europe
April 12 (UPI) -- Adults in the United States were up to three times more likely to die at a younger age than their peers in Europe, even before COVID-19, according to a Proceedings of the National Academy of Sciences analysis.

Health News // 21 hours ago
Study: High number of meals consumed in U.S. have low nutritional value
April 12 (UPI) -- Many of the meals consumed in the United States have poor nutritional quality, with the most nutritious eaten by children at school, a study published Monday by JAMA Network Open found.

Health News // 23 hours ago
Survey: Relying on TV, social media for COVID-19 news leaves people less informed
April 12 (UPI) -- People who obtain their news about COVID-19 from television and social media are less knowledgeable about the virus, according to the results of a survey published Monday by Current Medical Research & Opinion.