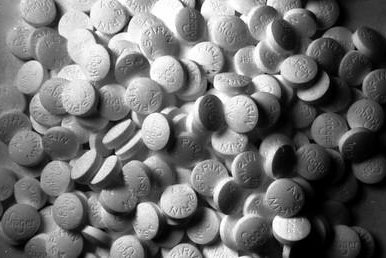 Aspirin appears to improve survival in bladder and breast cancer, according to a new study. Photo by Mike Steele/Flickr

Jan. 15 (UPI) -- People who take aspirin at least three times per week are more likely to survive bladder cancer, according to an analysis published Friday by JAMA Network Open.

Regular aspirin use also was associated with a reduced risk for death from breast cancer, the data showed.

However, taking aspirin had no effect on a person's risk for getting several forms of the disease, including bladder, breast, gastrointestinal or pancreatic cancers, the researchers said.

Aspirin also did not reduce a person's risk for death from gastrointestinal or pancreatic cancer, they said.

RELATED 'Polypill' reduces risk for heart attack, stroke by up to 40%, study finds

"These results may indicate that for some cancer types, any aspirin use may be advantageous [but] greater benefit may be observed with increased frequency of use," they said.

The findings are based on an analysis of cancer diagnoses and survival among nearly 140,000 participants in the Prostate, Lung, Colorectal and Ovarian Cancer Screening Trial, an ongoing National Cancer Institute-led research initiative intended to track the prevalence of these diseases.

For this study, the researchers focused specifically on rates of these cancers and deaths from the disease among participants age 65 and older, 18% of whom reported taking aspirin at least three times per week.

Cancers of the gastrointestinal, or GI, tract, the esophagus or the pancreas as well as uterine cancer were less common, though collectively they were diagnosed in 1.6% of the study participants, the researchers said.

Participants who used aspirin three or more times per week were more likely to survive for up to 20 years after being diagnosed with either bladder or breast cancer than those who took the over-the-counter drug less, according to the researchers.

However, the benefits of aspirin in survival decline over time, and the drug did not have the same effect on survival with the other cancers included in the study, they said.

Aspirin blocks the body's production of COX-2, an enzyme that may play a role in the progression of bladder and breast cancers, the researchers said.

Daily use of the drug has been recommended for older adults for years, as its role as a blood-thinner also helps reduce heart attack risk.

However, its use has been associated with the development of stomach ulcers in some people.

"Although aspirin use may confer a cancer protective effect, it remains necessary to consider the harms, as well as the benefits, of long-term aspirin use," the researchers wrote.

Health News // 1 hour ago
Study: Visit friends, take a walk or, better yet, read to lower dementia risk
Aug. 10 (UPI) -- A new study suggests that leisure activities like making crafts, playing sports or volunteering are linked to a reduced risk of dementia.

Health News // 2 hours ago
Poll: Most older, vaccinated Americans will get updated booster shots
Most older U.S. adults are prepared to roll up their sleeves to get an updated COVID-19 booster shot once one becomes available, a new poll shows.

Health News // 5 hours ago
PFAS 'forever chemicals' linked to common liver cancer
A chemical called perfluooctane sulfate (PFOS) has been linked to the most common type of liver cancer, a new study indicates.

Health News // 6 hours ago
Smoking linked to 123,000 annual U.S. cancer deaths
Cigarettes are still responsible for far too many cancer deaths every year in the United States, a new study finds.

Health News // 11 hours ago
FDA authorizes altered monkeypox dosing regimen to increase doses five-fold
Aug. 10 (UPI) -- The U.S. Food and Drug Administration has authorized an alternative dosing regimen of the monkeypox vaccine that will increase the total number of doses available five-fold amid a nationwide shortage of the medicine.