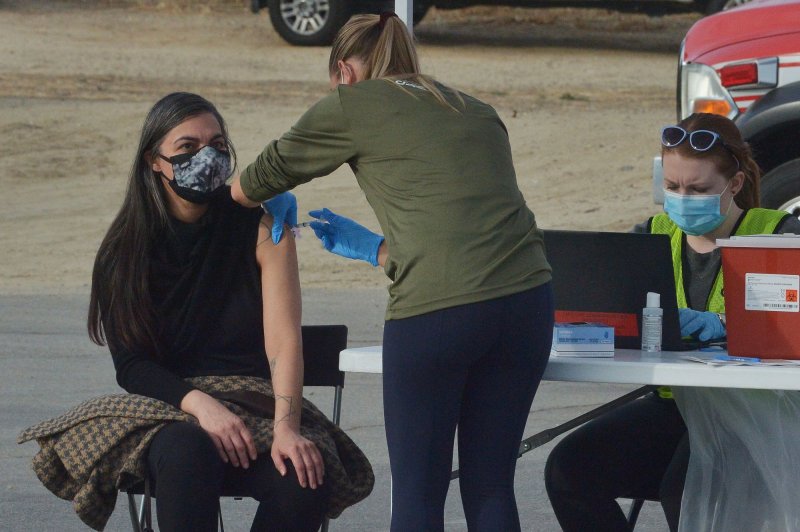 A medical worker is inoculated with the Moderna COVID-19 vaccine at a site in Los Angeles on Thursday. Photo by Jim Ruymen/UPI | License Photo

Jan. 8 (UPI) -- The COVID-19 vaccine made by Pfizer and BioNTech may be effective against new variants of the coronavirus that have emerged in Britain and South Africa, a new study indicates.

The study, conducted by University of Texas researchers and supported by the companies, found that the Pfizer-BioNTech "BNT162b2" vaccine was no less effective against the variant viruses than the original.

It determined that antibodies in vaccinated subjects were just as able to neutralize a lab-created version of the mutated coronavirus.

The findings were posted online and have yet to be peer-reviewed, but they offered hope that the approved "messenger RNA" COVID-19 vaccines approved so far will also work to neutralize the variant versions of the SARS-CoV-2 coronavirus.

RELATED Study: Symptom-free infected people cause at least half of COVID-19 spread

"I think this [study] is really important, because there is a lot of fear and uncertainty at the moment about this specific question," La Jolla Institute for Immunology scientist Shane Crotty told The Washington Post.

One of the new variants, known as SARS-CoV-2 B.1.1.7, was first identified in Britain last month and since been detected in numerous countries around the world, including the United States and Canada.

Another variant also emerged independently in South Africa and has since been detected outside of the country.

The Centers for Disease Control and Prevention says scientists are "working to learn more about these variants to better understand how easily they might be transmitted and whether currently authorized vaccines will protect people against them."

Preliminary studies indicate the British variant is associated with increased transmissibility, but there is no evidence so far that they cause more severe illness or increased risk of death.

Pfizer and Moderna -- maker of the other approved mRNA vaccine against COVID-19 -- each have said they believe their products will protect against the mutated forms of the virus.