Older adults exposed to air pollution might have a heightened risk of abnormal "plaque" accumulation in the brain, a new study suggests.

Plaques refer to clumps of protein called beta-amyloid that build up in the brains of people with Alzheimer's disease.

In the new study, researchers found that among older adults with memory and thinking problems, those exposed to higher levels of air pollution were more likely to show plaque buildup on brain scans.

The findings do not prove air pollution causes plaques or dementia, said lead researcher Leonardo Iaccarino, a postdoctoral fellow at the University of California, San Francisco's Memory and Aging Center.

But the results add to a body of research suggesting that air pollution is a risk factor for dementia.

A recent study, for example, found that older Americans living in polluted ZIP codes had higher odds of being hospitalized for dementia or Parkinson's disease than people breathing cleaner air.

The new study is different in that it looked at air quality and its relationship to a "biomarker" in the brain, Iaccarino said.

The 18,000 study participants all had either dementia or mild cognitive impairment -- problems with memory and thinking that can progress to dementia. Each underwent a PET scan to look for beta-amyloid deposits in the brain.

Iaccarino's team used data from the U.S. Environmental Protection Agency to estimate people's exposure to air pollution -- both around the time of the PET scan and 14 years earlier, based on their ZIP codes.

Overall, 61% showed beta-amyloid clumps on their brain scans. And the odds inched up along with air pollution exposure.

Why? One question was whether heart disease or stroke could explain the connection. Air pollution can worsen those conditions, and they are linked to dementia risk.

But Iaccarino's team accounted for heart disease and stroke diagnoses, as well as respiratory and neurological conditions, smoking habits, household income and other factors. And air pollution exposure, itself, was still a predictor for having beta-amyloid plaques.

Alzheimer's researchers suspect that plaques begin to form in the brain years before dementia symptoms are apparent, Iaccarino said. So the current findings link air pollution to a brain pathology underlying the disease.

That, again, does not prove cause and effect. But based on lab research, Iaccarino said, it's possible that air pollution directly affects brain health by causing inflammation.

Xiao Wu, a researcher at Harvard University in Boston, worked on the recent study linking air pollution to hospitalizations for dementia.

He called the new findings "important," because they tie air pollution to the biology underlying Alzheimer's.

Wu agreed that it's plausible that air pollutants have a direct effect: Research suggests the microscopic inhaled particles can cross the blood-brain barrier, he noted, and possibly lead to sustained inflammation.

At this point, Wu said, research into air pollution and brain health is in early days, and much more is left to learn.

"It's very important that we look at the modifiable factors that are related to dementia and other neurological conditions," he said.

If air pollution does contribute to Alzheimer's risk, Iaccarino said, it would be just one of many factors.

"Alzheimer's is a very complex condition," he said. "Air pollution may be a small, but significant, determinant."

It's significant, in part, because air quality can be improved.

In fact, Iaccarino noted, the Lancet Commission on Dementia recently added air pollution to its list of modifiable risk factors for the disease. Others include smoking, high blood pressure, physical inactivity and traumatic brain injury.

Iaccarino also stressed that the study did not look at single air-polluting events, like wildfires, but at average, daily-life exposures to dirty air.

It all suggests that even air pollution levels within "normal" range are associated with beta-amyloid in the brain, he said.

On the positive side, Iaccarino said, Americans are living with less-polluted air, on the whole, than in years past.

"Air quality in the U.S. has improved a lot in the last 20 years," he said. "It's going in the right direction."

The findings were published online this week in JAMA Neurology.

The Alzheimer's Association has advice on keeping the brain healthy.

Health News // 2 hours ago
Cancer patients, those on chemotherapy have worse COVID-19 prognosis
Oct. 28 (UPI) -- People with cancer who contract COVID-19 are nearly five times more likely to die from the infection than those without cancer, a study published Thursday by JAMA Oncology found. 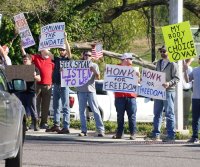 Health News // 3 hours ago
Those who feel 'invincible' less willing to get COVID-19 vaccine, study finds
Why do some people refuse to get vaccinated or wear masks to prevent the spread of COVID-19? The biggest driver of that decision is a belief that the virus poses no threat to them, a new international study suggests.

Health News // 10 hours ago
Study: 'Long COVID' can last a year after recovery
Patients suffering from "long COVID" can have symptoms that last a year or more, putting their jobs and everyday routines in jeopardy, a new study finds.

Health News // 23 hours ago
Study: Too little vitamin D may raise colon cancer risk in Black women
Black women in the U.S. with low levels of vitamin D have higher odds of developing colon cancer, according to a new research that echoes previous findings in White women.

Health News // 1 day ago
Study: Food texture fills in during loss of smell, taste after COVID-19
People who've lost their ability to smell and taste due to COVID-19 have significant struggles, but they can find ways to cope with their situation, a new study shows.

Study: 'Long COVID' can last a year after recovery