Use of ibuprofen and other NSAID pain relievers does not increase risk for severe COVID-19, a new study has found. Photo by Derrick Coetzee/Wikimedia Commons

Sept. 8 (UPI) -- People who use non-steroidal anti-inflammatory drugs, or NSAIDs, to treat pain are not at risk for more severe illness from COVID-19, according to a study published Tuesday by the journal PLOS Medicine.

Among users of NSAID pain relievers like ibuprofen and diclofenac infected with the new coronavirus, nearly 25% needed to be hospitalized, 5% required admission to the intensive care unit and 6.3% died, the data showed.

To compare, for those who did not use these drugs but tested positive for COVID-19, 21% were hospitalized, 5% needed ICU care and 6.1% died.

In the early phases of the pandemic, there were concerns that the use of the painkiller ibuprofen may lead to a more severe course of coronavirus disease, the researchers, from the University of Southern Denmark and Aarhus University Hospital in Denmark, said.

"Considering the available evidence, there is no reason to withdraw well-indicated use of NSAIDs during the pandemic," they wrote.

"However, the well-established adverse effects of NSAIDs, particularly their renal, gastrointestinal and cardiovascular effects, should always be considered, and NSAIDs should be used in the lowest possible dose for the shortest possible duration for all patients," they said.

Ibuprofen and other NSAIDs are some of the most commonly used medications in the United States, with an estimated 30 million doses consumed and 70 million prescriptions administered annually, according to the American College of Rheumatology.

For this study, the researchers obtained data on all 9,326 Danish residents who tested positive for COVID-19 between Feb. 27 and April 29, including NSAID use, hospitalization, ICU admission and need for mechanical ventilation and acute renal replacement therapy.

Overall, 248 people -- or just under 3% -- of the patients included in the analysis had filled a prescription for NSAIDs within 30 days of their positive virus test, according to the researchers.

There was no association between disease severity and NSAID use, the researchers said.

Health News // 1 hour ago
Belly fat can harm heart health even among those who aren't obese
Extra padding around the belly can spell trouble for the heart, even if you're not technically overweight.

Health News // 16 hours ago
Study: Little progress in boosting numbers of Black doctors in U.S.
The percentage of U.S. doctors who are Black has barely risen in the past 120 years, and there's still a wide pay gap between White and Black physicians, a new study finds.

Health News // 1 day ago
Global access to COVID-19 vaccines needed to end pandemic, experts say
April 21 (UPI) -- The COVID-19 vaccines have provided the pandemic-weary public with a "light at the end of the tunnel," but the threat posed by the virus will not end until more of the world has been immunized, experts say. 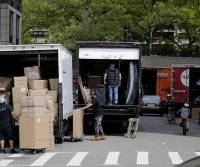 Health News // 1 day ago
Eviction bans helped stop COVID-19 spread in cities, study says
Eviction bans during the COVID-19 pandemic reduced infection rates not only in people who avoided displacement but also in their communities, according to a new study.