Cochlear implants improve hearing in older adults, with no side effects

Seniors dissatisfied with their hearing aids may benefit from cochlear implant surgery, a new study has found. Photo by Jonas Bergsten/Wikimedia Commons

Aug. 27 (UPI) -- Cochlear implants offer "clinically meaningful improvement" over hearing aids in both hearing and quality of life for adults age 65 and older with hearing loss, according to a study published Thursday by JAMA Otolaryngology-Head & Neck Surgery.

Seniors who previously used hearing aids saw a 20% to 40% improvement on commonly used measures for hearing performance after receiving Cochlear implants, with no side effects reported, the data showed.

The findings are significant because implants are "underused," particularly in older adults, the researchers said.

"This study emphasizes that patients do not have to be profoundly deaf to experience significant hearing and social benefits from cochlear implants, and that cochlear implant surgery is well tolerated even as adults age and acquire other health ailments," said Wick, an ear, nose and throat surgeon at Washington University School of Medicine in St. Louis.

Nearly 25% of those age 65 to 74 and 50% of those 75 and older have disabling hearing loss, according to the National Institute on Deafness and Other Communication Disorders.

Cochlear implants, which were approved by the U.S. Food and Drug Administration in 1984, are surgically implanted neuroprosthetic devices that provide people with moderate to severe hearing loss a modified sense of sound.

The implants cost roughly $30,000 to $50,000 without insurance, but they may be covered by insurance plans and Medicare for patients who meet eligibility requirements.

The devices do this by bypassing the normal acoustic hearing process and replacing it with electric signals that directly stimulate the auditory nerve in the brain.

Despite significant improvements in the technology over the past 30-plus years, an estimated 5% to 10% of those who would benefit from cochlear implants are referred to an implant center, Wick said.

This is due, in part, to the cost of the technology, and the general belief that older adults would derive less benefit, he said.

For their research, Wick and his colleagues assessed the performance of cochlear implants in 75 adults ranging in age from 65 to 91 years who had hearing loss and were using hearing aids in both ears.

Six months after cochlear implant surgery in one ear, participants saw a 37% improvement in scores on the Consonant-Vowel Nucleus-Consonant test, which assesses the perception of real words and of speech sounds, the data showed.

Cochlear implant surgery also resulted in a 22% improvement in participants' performance on the AZBio Sentence test, a speech perception measure, the researchers said.

Both the Consonant-Vowel Nucleus-Consonant and AZBio Sentence tests are commonly used to evaluate hearing loss, the researchers said.

"This study highlights that if patients are not satisfied with their hearing aid performance, then they should be referred to a center that can evaluate them for cochlear implantation," Wick said.

"This does not mean that all 90% of those non-referred patients should undergo a cochlear implant, but the vast majority would benefit from talking to an otolaryngologist," he said. 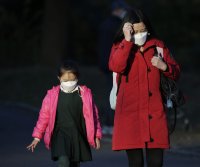 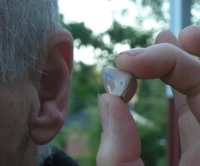