Virus sparked global mask-wearing, but not much in U.S. 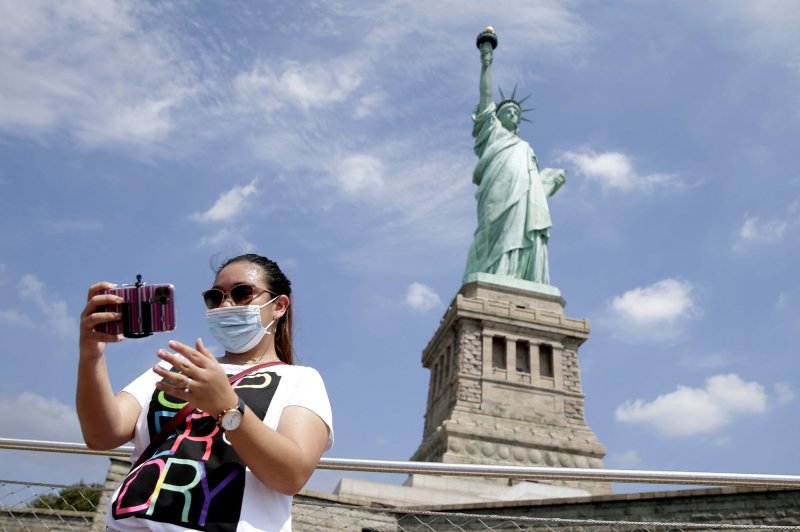 A sightseer wears a face mask next to The Statue of Liberty. Mask-wearing may help reduce face-touching, a new study finds. Photo by John Angelillo/UPI | License Photo

July 29 (UPI) -- Use of face-coverings increased as much as 100-fold worldwide in March in the early stages of the COVID-19 pandemic -- though far less in the United States -- a study published Wednesday by JAMA Network Open found.

Masks not only might have helped to limit spread of the virus via respiratory droplets, but also reduced the amount of times people touched their face, the researchers said.

People who have had contact with contaminated surfaces with their hands can then infect themselves if they touch their face -- particularly near the eyes, nose and mouth -- before washing their hands, they said.

"[We] found that mandatory mask-wearing policies increased the mask-wearing rate among the general population during the COVID-19 pandemic," wrote the researchers from the Third Affiliated Hospital of Sun Yat-sen University in Guangzhou, China.

"Wearing either a medical or fabric mask was associated with reduced face-touching behaviors, which might prevent transmission of COVID-19 among the general population in public areas," they said.

The U.S. Centers for Disease Control and Prevention did not recommend that Americans wear face coverings in public until late April.

Since then, compliance with the recommendations has varied, according to media reports.

For this study, researchers compared mask-wearing in China, Japan, South Korea, England, France, Germany, Spain, Italy and the United States before the COVID-19 pandemic -- from January 2018 through October 2019 -- to habits during February and March of this year, when the virus was taking hold in many parts of the world.

To do so, they used videos recorded in public transportation stations, streets and public parks, and included people who "clearly displayed their face and face-touching behavior," the researchers said.

Mask-wearing and face-touching behaviors of more than 7,500 people were included in the analysis, they said.

The researchers found that mask-wearing increased significantly in all regions during the study period -- except the United States and western Europe -- to more than 99% of people from 1% in China, to 39% from 3% in Japan and to 86% from less than 1% in South Korea.

Within the United States, 2.1% percent of people observed were wearing a mask in March, compared to 0.4% previously, they said.

Surgical masks were the primary form of face coverings worn in all countries included in the study, at roughly 90%, according to the researchers.

Although research documenting the spread of the virus from touching contaminated surfaces is limited, the CDC has recommended frequent hand-washing and limiting face-touching since early March.

Researchers from Harvard T.H. Chan School of Public Health in a separate study have attributed 30% to 35% of virus transmission on the Diamond Princess cruise ship to contaminated surfaces.

The Harvard study has not yet been published and or peer reviewed, but it reinforces health agency advice on mask wearing, experts say.

Fortune, chair of the Department of Immunology and Infectious Diseases at Harvard T.H. Chan, was not involved in either study.

Masks can mitigate risk of COVID-19 'super spreaders' in rooms

Health News // 8 hours ago
Health benefits of electric vehicles are adding up, study shows
Electric cars are still in the minority on America's roads, yet researchers are already seeing health benefits from reduced tailpipe pollution.

Health News // 22 hours ago
Hormone shot kisspeptin may improve low libido
If you are one of the millions of people distressed by low libido, help may be on the way in the form of a new hormone shot.