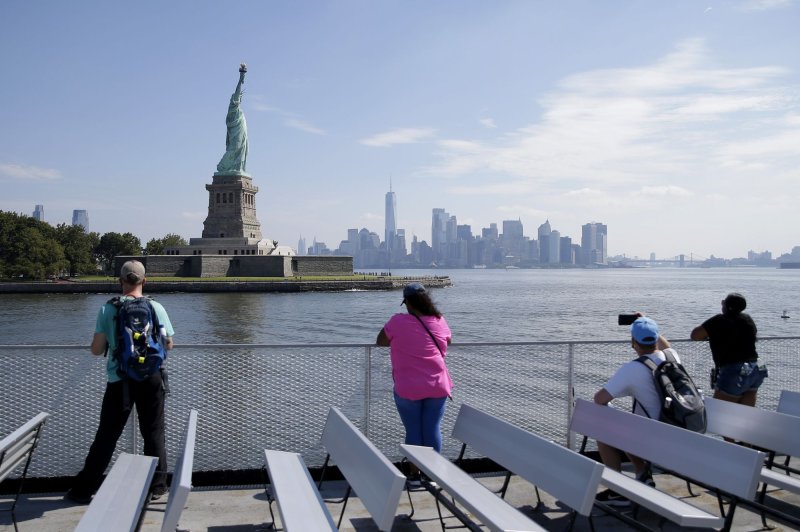 Sightseers space out aboard a Statue Cruises boat on route to The Statue of Liberty. Social distancing is the most effective way to slow COVID-19 spread, a new study has found. Photo by John Angelillo/UPI | License Photo

July 23 (UPI) -- Americans need to cut visits to non-essential businesses in half during the COVID-19 outbreak to reduce virus transmission by 45%, a study published Thursday by JAMA Network Open found.

Decreasing non-essential activities by 75% would reduce transmission by 60%, researchers said.

However, even these major lifestyle changes might not be enough to contain an outbreak of the coronavirus, they said.

"While we have improved our messaging around the use of masks, masks need to be combined with significant physical distancing, including limiting gathering sizes and avoided crowded locations, for communities to be successful in controlling transmission," study co-author Dr. David M. Rubin told UPI.

"There is a great need for the public to come to terms with the need to incorporate these inconveniences -- namely masking and avoiding crowds -- into their lives in a way that best prevents spread," said Rubin, a pediatrician and director of the PolicyLab at Children's Hospital of Philadelphia.

Even as the virus continues to spread in much of the United States -- to nearly 4 million cases, according to the latest figures from Johns Hopkins University -- some resistance to wearing face coverings and social distancing exists in many parts of the country.

Gavan Fitzsimons, a professor of marketing and psychology at Duke University, described these objections as an example of the psychological phenomenon called reactance, or an unpleasant emotional response to rules or regulations that threaten or limit behavioral freedoms.

RELATED Face coverings, social distancing can reduce COVID-19 spread by up to 65%

Some people experience reactance when they feel that someone or something is taking away their freedom of choice, said Fitzsimons, who was not part of the JAMA Network Open study.

"Many people perceive that some of the public health guidelines are direct threats to their freedoms, [and] they'll go to great lengths to not follow those guidelines," he said during a conference call with reporters Wednesday.

For their research, Rubin and his colleagues analyzed COVID-19 transmission rates, population density, demographic features -- including socioeconomic data and prevalence of chronic health conditions -- and adherence to social distancing measures in 211 counties in 46 U.S. states with a total population of nearly 179 million.

They focused on the early stages of the outbreak in the United States, the period from Feb. 25 to April 23. In general, regions with the highest population densities saw the most virus transmission, according to the researchers.

However, social distancing measures in these areas also had the greatest impact, the researchers said.

By cutting visits to non-essential business by more than 75%, people reduce the average number of those one sick person could infect from to 1.6 from 5.7, researchers said.

Warmer weather also might have played a role in the reduced virus transmission, they said.

"Unequivocally, the strongest factor in our models that was associated with reduced transmission has been social distancing," Rubin said.

"We need to accept some consistent national standards around masking, reducing the size of crowds and limiting access to locations, like indoor bars, where the risk of outbreaks has been highest.

"Until we do that, we can expect continued challenges around circulating virus in communities that will place in jeopardy our hopes for resuming school and normal work routines in the fall."

Health News // 16 hours ago
Drug combo can produce stronger flu treatment, study finds
Aug. 16 (UPI) -- Combining antiviral drugs such as Tamiflu, which has been used for decades, with antibody therapies may provide a one-two punch to knock out influenza, research published Tuesday suggests.

Health News // 17 hours ago
Virtual museums may improve mental health of aging adults
By combining technology with interactive art activities, older people at home can have museums come to them -- and this can support their physical, mental and social well-being, a new study reports.