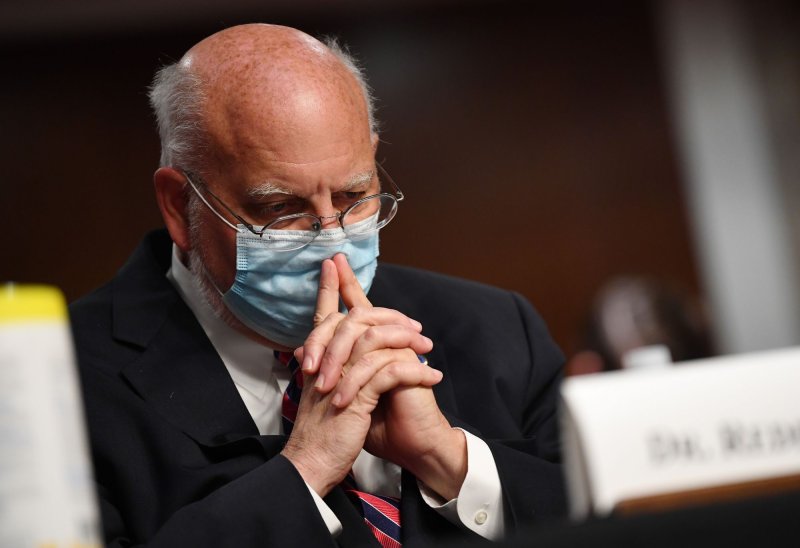 CDC Director Dr. Robert Redfield said that the change in reporting practice will not deprive his organization from coronavirus data. Photo by Kevin Dietsch/UPI | License Photo

July 16 (UPI) -- The National Governors Association called on the Trump administration on Thursday to delay implementing a new measure requiring hospitals to report their coronavirus statistics directly to the Department of Health and Human Services rather than to the U.S. Centers for Disease Control and Prevention as they had been doing.

"The administration has stated that they plan to utilize this data to better allocate supplies and drugs to states," the organization said on behalf of the governors of all 55 states and territories in a statement. "To ensure the accurate reporting of this data, governors are requesting a 30-day delay of these new requirements, in order for hospitals to learn a new system as they continue to deal with this pandemic."

The move, which took effect Wednesday, has come under scrutiny by healthcare professionals and politicians over the Trump administration's reason for it.

"CDC has had a system in place for over a decade to track infection data, and hospitals and states know and trust this system -- so it's entirely unclear why the Trump administration has asked states and hospitals to upend their reporting system in the middle of a pandemic -- in 48 hours nonetheless -- without a single explanation as to why this new system is better or necessary," said Sen. Patty Murray, D-Wash., ranking member of the Senate Health, Education, Labor and Pensions Committee, in a statement.

"The CDC's old data gathering operation once worked well-monitoring hospital information across the country, but it's an inadequate system today," Caputo said in a statement. "The president's Coronavirus Task Force has urged improvements for months, but they just cannot keep up with this pandemic."

In a call with reporters, CDC Director Robert Redfield said Wednesday the new system will reduce the burden currently placed on reporting such information as well as reducing confusion and duplication.

"No one is taking access or data away from CDC," he said.

The National Governors Association also said the governors are urging the administration to make the information the HHS collections publicly available.