July 7 (UPI) -- One in four minority Americans in the United States face racial discrimination over fears they have been infected with the new coronavirus, according to the findings of a survey released Tuesday by the University of Southern California Dornsife Center for Economic and Social Research.

Roughly 33 percent of black, Asian and Latin Americans say they have experienced at least one incident of discrimination related to COVID-19, the researchers found.

"The early spike in the percentage of people who experienced COVID-related discrimination was attributable -- in part -- to discriminatory reactions to the growing number of people wearing masks or face coverings at the early stage of the pandemic," Ying Liu, a research scientist with the center, said in a press release.

"Asian Americans were the first group to experience substantial discrimination, followed by African Americans and Latinos," she said. We also found that in some earlier weeks of the pandemic, people who were heavy users of social media were more likely to report an experience of discrimination."

The Understanding Coronavirus in America Study regularly surveys nearly 7,500 people throughout the country to learn how COVID-19 impacts their attitudes, lives and behaviors, according to the USC researchers.

To measure incidents of discrimination, respondents were asked if people feared, threatened or harassed them, or treated them poorly, because of concerns that they had COVID-19, the researchers said.

The percentage of people who experienced a recent incident of COVID-related discrimination peaked in April at 11 percent and steadily declined to 7 percent at the beginning of June, they said.

In early June, Asian Americans were more than 2.5 times as likely as white Americans to experience a recent incident of COVID-related discrimination, while black and Latin Americans were nearly twice as likely, according to the researchers.

As of early April, about 70 percent of the country thought people who had COVID-19 were dangerous and nearly 30 percent thought formerly infected people were dangerous, the researchers said.

By early June, the percentage of Americans who considered infected people to be dangerous had dropped to under 30 percent, while only 5 percent thought people who had recovered from the virus were dangerous, they said.

"As growing numbers of people knew family members, friends and coworkers who were infected with COVID-19, we saw a decrease in the stigma associated with the virus," dsif Kyla Thomas, a sociologist at the center.

"We also saw a steep decline in the percentage of people who perceived coronavirus infection as a sign of personal weakness or failure," she said.

Adults aged 18 to 34 were three times as likely as seniors 65 or older to report a recent incident of coronavirus-related discrimination, the USC researchers found.

Data from the study, which is supported in part by the Bill and Melinda Gates Foundation, is updated daily and available to researchers and the public at covid19pulse.usc.edu.

A separate survey, conducted by the American Heart Association and also released Tuesday, found that approximately 90 percent of older adults -- age 60 and older -- with a history of type 2 diabetes, heart disease or stroke are more worried that, because of the pandemic, health will limit their experiences. That compared to less than 60 percent of people without those conditions. 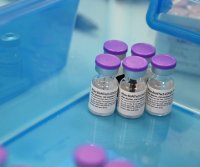