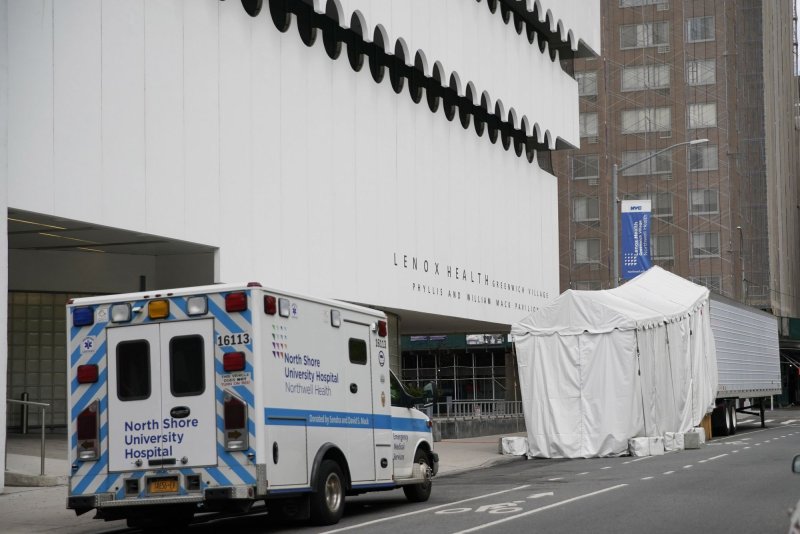 Researchers say the number of deaths caused by COVID-19 may be undercounted by up to 28 percent. File Photo by John Angelillo/UPI | License Photo

July 1 (UPI) -- Official counts of COVID-19 cases in the United States may underestimate deaths by as much as 28 percent, according to an analysis published Wednesday by JAMA Internal Medicine.

From March 1 through May 30, an estimated 122,300 Americans died after being infected with the new coronavirus, SARS-CoV-2, the researchers said. That's higher than the Center for Disease Control and Prevention's tally of 95,235.

The difference is based on the researchers' assessment of "excess deaths" across the country -- the actual number of reported deaths compared to figures from the same period for the previous five years."

There have been questions about whether the reported statistics overcount COVID-19 deaths, but our analyses suggest the opposite," study co-author Daniel Weinberger, an associate professor of epidemiology at Yale University School of Medicine, told UPI.

RELATED 2 in 3 parents would send kids to school in the fall, survey finds

"The number of reported COVID-19 deaths likely represents an undercount of the true burden caused by the virus."

Analyses of "excess deaths" have been used to estimate deaths caused by infectious diseases in the past, including pneumonia, the flu and HIV, according to Weinberger and his colleagues.

As of Wednesday morning, nearly 2.7 million people in the United States have been diagnosed with COVID-19, and more than 127,000 have died, according to figures from Johns Hopkins University.

RELATED Most with coronavirus unsure how they caught it, CDC says

CDC officials acknowledged last week that the total number of people actually infected with COVID-19 may be 10 times higher than official estimates because many who are infected don't experience symptoms and don't know they have it.

For the study, researchers reviewed mortality data from the CDC's National Center for Health Statistics.They compared the "expected" number of deaths for the period -- based on an average of totals for 2015-19 -- and compared it to the total for 2020. The period covers the peak of the COVID-19 outbreak so far in parts of the United States.

The excess deaths for the three-month period in 2020 could be attributed to COVID-19, but may also be influenced by "people avoiding care for emergency medical conditions, like heart attacks," as well as declines in certain categories of deaths, like car accidents, Weinberger said.

RELATED COVID-19 outbreak will 'get worse before it gets better,' experts say

"Excess deaths can provide useful information in addition to the traditional statistics that are based on laboratory testing, [but] the data need to be interpreted with caution," Weinberger said. "Looking at changes in deaths due to any cause provides a more complete picture of the epidemic."