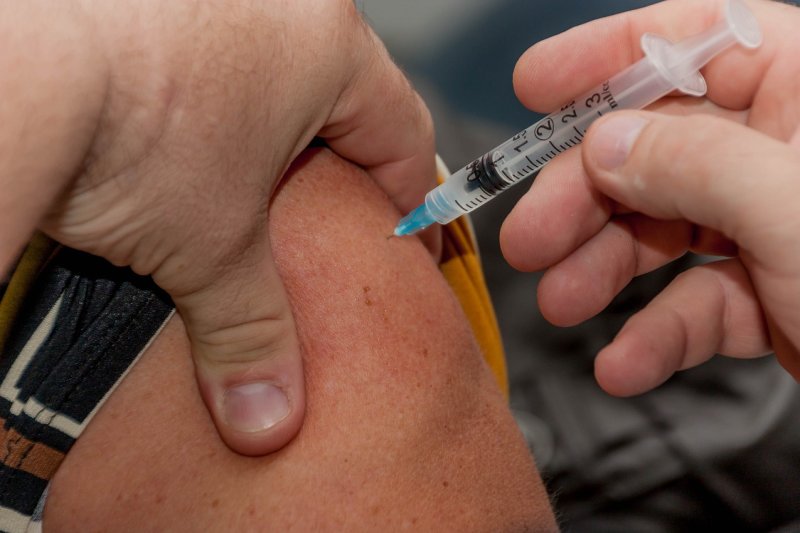 Chinese officials approved a COVID-19 vaccine for use in the country's military personnel on Monday. Photo by huntlh/Pixabay.

June 29 (UPI) -- Chinese officials announced Monday that they have approved a new COVID-19 vaccine for immediate use by military personnel.

The vaccine, called Ad5-nCoV, is currently being evaluated in clinical trials.

It is unclear how many of the nearly 2.2 million people who serve in the Chinese military will receive the vaccine.

Ad5-nCoV was developed as part of a collaborative effort between the Beijing Institute of Biotechnology, part of the Academy of Military Medical Sciences, which is the military's research division, and the biotechnology firm CanSino Biologics.

In a filing with the Hong Kong stock exchange, CanSino said the vaccine has "a good safety profile" and demonstrated the potential to prevent COVID-19 in pre-clinical studies in animals.

Ad5-nCoV is built upon CanSino's adenovirus-based viral vector vaccine technology platform, which has also been successfully applied to develop the globally innovative vaccine against Ebola virus infection, the company said.

"The vaccines that are now becoming available for testing did not exist three years ago, so we have no experience with how effective they will be and how safe they will be," Barry Bloom, professor of public health at Harvard T.H. Chan School of Public Health, said last week during a conference call with reporters.

Bloom was not commenting on Ad5-nCoV specifically.

"Many of the new platforms have been developed for Ebola or SARS, but they have not been tested with the [new] coronavirus," he said.

A phase 1 clinical trial published on May 22 by the Lancet concluded that the vaccine was safe for humans and had few if any side effects. Phase 2 trials are ongoing and results are pending, according to CanSino.

Safety is essential with vaccines because they are given to "healthy people" as opposed to drug treatments, which are given to "sick people," Bloom said.

Drugs and vaccines must pass through three phases of clinical trials before they can be approved for widespread use. Phase 3 trials for a vaccine focus on its ability to prevent infections in humans and generally take months to complete, he said.

"So [to] say we'll have a vaccine by January is very misleading," he said. "There may be a phase 3 trial finished in early January, [but] that doesn't mean a billion doses or three billion doses are going to be available instantly all around the world."

"Actual implementation of vaccines is going to take one to two years [at least]," he added. "There is no shortcut."

In addition, there have already been more than 1,000 clinical trials on dozens of drugs and vaccines designed to work against the new coronavirus, SARS-CoV-2, but no effective options have been found, according to the Lancet.

In order to achieve herd immunity with a vaccine, as many as 6 billion of the 7.6 billion people in the world would need to receive the shot, meaning that billions of doses would need to be produced, which will also take time, according to Bloom.

And, an effective vaccine would have to protect against SARS-CoV-2 better than natural antibodies to the new coronavirus, which appear to "dissipate very quickly" -- in less than 24 weeks -- in those who have recovered from COVID-19, he said.

Health News // 4 hours ago
Clinical trials for cancer drugs not halted by COVID-19 pandemic
The pandemic widely disrupted medical care across the United States, but a new study reports that clinical trials testing cancer treatments were able to carry on.

Health News // 15 hours ago
Neonicotinoid insecticides harm bees even in small amounts
Aug. 2 (UPI) -- A type of insecticide, called neonicotinoids, is harmful to bees when applied to commercial crops, even at levels on par with instructions on their labels, according to a study published Monday.

Health News // 20 hours ago
Study: Texted nudge encourages hesitant people to get COVID-19 vaccine
Aug. 2 (UPI) -- Text messages are an effective way to remind unvaccinated people to schedule and show up for their COVID-19 shot, a study published Monday by the journal Nature found.