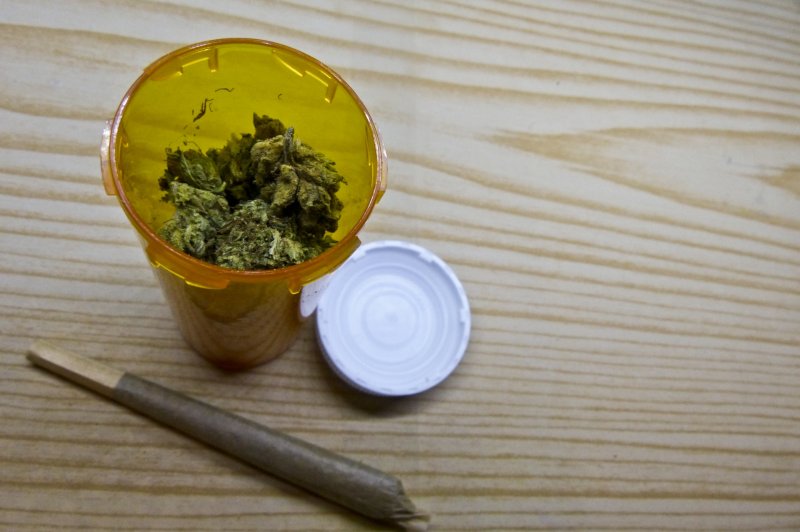 People using medical cannabis also also tended to use fewer prescription medications and were less likely to have been to the hospital recently, the survey showed. Photo by Circe Denyer/publicdomainpictures

More and more U.S. states are allowing marijuana to be taken as medicine, and a new study suggests that users do indeed feel better.

They also tended to use fewer prescription medications and were less likely to have been to the hospital recently.

A majority of U.S. states have made marijuana legal for medical or recreational use, and studies have looked at whether those laws are linked to increased marijuana use, car accidents or emergency room visits.

But little research has examined the impact of legalization on the people who use medicinal cannabis, said senior study author Ryan Vandrey, an associate professor of psychiatry and behavioral sciences at Johns Hopkins University School of Medicine in Baltimore.

The finding that cannabis users felt better than nonusers is not necessarily surprising, according to Vandrey. But it's important to demonstrate it in a study, he said.

The results do not prove, however, that medicinal cannabis is effective. It's also unclear whether certain products were linked to particular benefits.

Medicinal cannabis included not only formulations of THC -- the chemical behind marijuana's "high" -- but also cannabidiol, or CBD, which does not create a high. Fifty-eight percent of users were taking "CBD-dominant" oils, tinctures and other products.

CBD has exploded in popularity across the United States in recent years, and is marketed in everything from oils and capsules to cookies and coffee. The purported benefits are also wide-ranging, and include relief from chronic pain, anxiety and insomnia.

But nearly all of those claims are untested, said Richard Miller, a professor of pharmacology at Northwestern University Feinberg School of Medicine in Chicago.

CBD has been shown to improve certain rare seizure disorders, he noted. In 2018, the U.S. Food and Drug Administration approved Epidiolex -- a purified, pharmaceutical-grade CBD -- for those conditions.

That said, cannabis clearly does have some medicinal use, according to Miller.

"With respect to humanity's experience with cannabis," he said, "people have taken it medicinally for thousands of years." It was only in the last century that marijuana prohibition took hold -- making those years "the anomaly," Miller said.

The new findings, published recently in the journal Cannabis and Cannabinoid Research, are based on responses from 808 cannabis users and 468 "controls." All had chronic health conditions -- most often neurological disorders such as multiple sclerosis or epilepsy chronic pain or psychiatric conditions such as depression or anxiety.

All were seeking information from a nonprofit on medical marijuana use people in the control group were not using cannabis but were considering it.

Jane Allen, an analyst with the research institute RTI International in North Carolina, called the study's recruitment strategy a limitation. Since participants consulted the nonprofit, they likely had "positive perceptions" about cannabis from the start, she said.

"The study would be stronger and less susceptible to bias if recruitment had been through a cannabis-neutral channel," Allen said.

To Vandrey, the findings highlight the need for researchers to dig deeper into medicinal cannabis. Studies need to look, for example, at individual health conditions and the effects of a given CBD or THC product, he said.

"If we're going to legalize cannabis to be used as medicine," Vandrey said, "then we need to better understand how to use it as medicine."

Miller agreed. He said the new findings "add to the flow of data" that medicinal cannabis has benefits -- but the specifics remain unclear.

The study also found that only 27 percent of cannabis users said they were doing so under a doctor's recommendation.

That's concerning, according to Vandrey. "So who is recommending it to them?" he said. "And are their doctors aware they're using it?"

For one, he noted, there's increasing evidence that cannabinoids can interact with certain medications.

Vandrey suggested that if people are interested in using cannabis for medical reasons, they talk to their doctor. And do the research: "See if there's evidence of safety and efficacy for your health condition," he said.

The U.S. National Center for Complementary and Integrative Medicine has more on cannabis.

Health News // 3 minutes ago
Listeria outbreak kills one, sends 22 to hospital, CDC says
July 1 (UPI) -- At least 23 people in 10 states have been sickened and one of them has died in a listeria outbreak may have originated in Florida, U.S. health officials reported.

Health News // 7 minutes ago
Viral infection from mosquito bite may attract more mosquitoes
When a mosquito bites and infects you with a virus like dengue or Zika, it also makes you smell good to other mosquitos, new research suggests.

Health News // 1 hour ago
Independence Day activities bring risks for those with asthma, allergies
It's time to enjoy summer celebrations, but allergies and asthma can put a damper on the festivities.

Health News // 7 hours ago
Concerns mount over accuracy of online abortion information, privacy of searches
WASHINGTON, July 1 (UPI) -- In a post-Roe world, the possibility of receiving online misinformation about abortion, as well as maintaining privacy when seeking to learn about reproductive healthcare, have become major concerns.

Health News // 9 hours ago
Banking stool samples may improve healthy aging
Banking samples of your own poop in your youth and then transplanting them back when you're old might be a key to healthy aging, scientists suggest.

Health News // 21 hours ago
Cancer survivors at greater risk for heart disease, study shows
If you survive cancer, you're more apt to have heart trouble later on, a new study shows.

Health News // 1 day ago
Many parents are lax on fireworks safety to protect kids
Many U.S. parents don't take proper precautions to protect their children from fireworks-related burns and injuries, claims a new survey released just ahead of the Fourth of July.
Advertisement