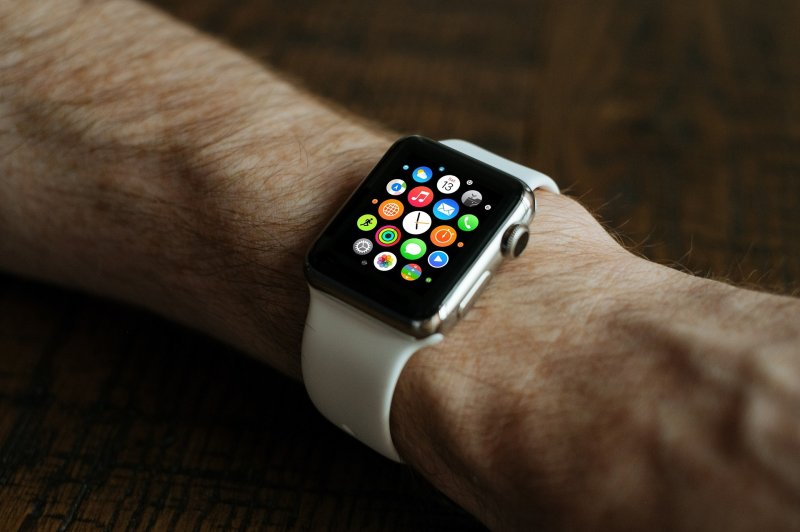 Devices like the Apple Watch may be key in the public health response to COVID-19 and future pandemics, researchers say. Photo by fancycrave1/Pixabay

June 19 (UPI) -- University of Arizona officials announced this week they plan to provide a smartphone app to students and staff members who return to campus in the fall, enabling them to notify the school community of potential exposure to COVID-19.

The app, called Covid Watch, was developed by researchers at Stanford University and the University of Waterloo in Canada, and is designed to be an alternative to digital contact tracing.

Covid Watch is one of several apps available or under development to help limit the spread of COVID-19. The apps are seen as potentially important to controlling the pandemic, while also protecting the privacy of users -- which has been a principal objection from some people.

Instead of informing a central authority of COVID-19 exposure status, Covid Watch works by notifying others who may have been exposed directly using random numbers exchanged by local Bluetooth signals, University of Arizona officials said.

The system also preserves users' anonymity and protects their personal data, they said.

"If the testing phase goes well, we plan to launch the app for the entire campus community, and if enough people in the campus community choose to alert each other of their exposure and follow the general guidance, community spread can be stopped," Joyce Schroeder, chair of the department of molecular and cellular biology at the University of Arizona, said in a statement.

Approximately 56 percent of university students and staff members would need to opt into the system for it to effectively control community spread on campus, she said.

The Covid Watch app, which is overseen by a non-profit organization established by the developers, is one of several platforms being implemented or evaluated worldwide for to screen for the new coronavirus, SARS-CoV-2 and for contract tracing to identify people who might have been contact with an infected person.

Use of technology in this way, as the world looks to the future after the ongoing pandemic, may be part of the "new normal," experts say.

"We've been working to collect data on infections using mobile devices for a long time," Jessilyn Dunn, part of a team of researchers at Duke University working on a project called CovIdentify, told UPI.

They hope to learn how data collected by smartphones, Apple Watches and other smartwatches can help spot symptoms of COVID-19 in users.

"The technology isn't new, but COVID-19 is," said Dunn, an associate professor of biomedical engineering at Duke. "The only question really is whether the devices are sensitive enough to spot the specific symptoms of the virus."

Similarly, an international team of researchers is evaluating a device called the Oura ring -- which is worn like a bracelet or watch -- as a COVID-19 symptom checker. The device is designed to monitor wearers' body temperature, heart rate, respiratory rate and activity level, among other parameters.

"The best analogy [to describe the potential benefits of wearable technology] is the difference between a video recording and a snapshot," Janet Robishaw, senior associate dean for research at Florida Atlantic University's Schmidt College of Medicine, one of the sites of the Oura study, told UPI.

"The former provides so much more information about the activity -- you can capture mood, body language, dynamics of activities, etc. -- and that can be turned into knowledge," she said.

Worldwide, governments are taking similar approaches with the public at large. Countries such as France, Germany, Italy and South Korea have launched contract tracing apps for smartphones, mirroring one used in China. Ireland and Japan are reportedly also beta testing similar apps.

To date, the main objection to using these technologies has centered on privacy. Critics have expressed concern that users' personal health data -- not to mention their social activities -- can be accessed and potentially exploited.

"That's probably the number-one conversation we have," Dunn said, adding that these concerns are part of the reason CovIdentify doesn't include contact tracing.

However, while there is "always a risk for a security breach," she said, she and her colleagues have taken steps to protect user privacy. Their counterparts elsewhere have offered similar assurances.

Either way, the potential benefits associated with the role of wearable technologies in fighting the pandemic far outweigh the downsides, Dunn said.

"One of the questions a lot of us have been asking ourselves is why, with all the technology we have at our disposal, our response to the COVID-19 pandemic hasn't been all that different from how the world dealt with the flu in 1918," she said.

"We have all this great technology that can provide us with accurate data," Dunn said. "Why shouldn't it be part of our public health response not only for COVID-19, but for future pandemics as well?"