Twice as many women who have high blood pressure during pregnancy may be at an increased risk for heart and kidney disease than once thought, a new study suggests.

For the study, researchers collected data on more than 9,800 pregnancies among more than 7,500 women in Olmsted County, Minn., who gave birth between 1976 and 1982.

Women under age 20 and older than 35 had the highest rates of preeclampsia and gestational hypertension.

This suggests that 1 in 6 women may be at increased risk for heart or kidney disease. Women with HDP developed these conditions earlier than other women, the study found. The report was published May 4 in the Journal of the American College of Cardiology.

Lead author Dr. Vesna Garovic, a professor of medicine at the Mayo Clinic in Rochester, Minn., noted that even though rates of HDP had increased over the past three decades, no one had studied women who may have had high blood pressure in one pregnancy but not all.

Advertisement
RELATED Heart attack, stroke down among people in Australia with diabetes

"By only looking at HDP rates per-pregnancy, we have been vastly underestimating the number of women who are affected by this condition and may be at risk for future heart or kidney disease," Garovic said in a journal news release. "Looking at the per-woman rate allowed us to assess women with more than one pregnancy, who may have had HDP, including preeclampsia, during one of her pregnancies, but not the other," she explained.

For more on high blood pressure and pregnancy, see the U.S. Centers for Disease Control and Prevention. 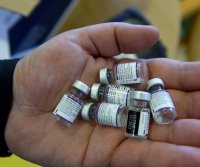 Health News // 19 hours ago
Common lung function test often misses emphysema in Black men
Emphysema is missed more often in Black Americans than in White Americans, and now researchers report they have figured out why.
Advertisement