Study: Breastfeeding may reduce risk for ovarian cancer by 24%

A new study finds that breastfeeding may reduce women's risk for ovarian cancer later in life. File Photo by lgrodela/pixabay

April 2 (UPI) -- Women who breastfeed their children may reduce risk for ovarian cancer later in life by as much as 24 percent, a new study has found.

The research, published Thursday by JAMA Oncology, also demonstrated that the longer women breastfeed, the more they can reduce their risk. In fact, breastfeeding children for 12 or more months was associated with a 34 percent reduction in risk for disease, the authors noted.

"Breastfeeding any child, even for as little as one to three months can help reduce ovarian cancer risk," study co-author Dr. Naoko Sasamoto, a research fellow in obstetrics, gynecology and reproductive biology at Brigham and Women's Hospital in Boston, told UPI. "We hope these findings would support mothers who choose to breastfeed and clinicians who care for pregnant and nursing women. In addition, we hope these findings will support policies to build supportive environments for mothers who choose to breastfeed."

Sasamoto also emphasized, however, that their findings are only applicable to women who have given birth, since women without children were not included in the analysis.

According to the American Cancer Society, more than 200,000 women in the United States are diagnosed with ovarian cancer annually. Those diagnosed often have a poor prognosis.

Although the relationship between breastfeeding and the disease remains unclear, several studies have linked the two in the past. The analysis pools together many of these earlier studies and focuses specifically on epithelial ovarian cancer, by far the most common form of the disease.

The team reviewed data from 13 case-control studies participating in the Ovarian Cancer Association Consortium and recorded participant breastfeeding history, including duration per child breastfed, age at first and last breastfeeding and years since last breastfeeding, using questionnaires or interviews. Collectively, the studies included 9,973 women with ovarian cancer with a mean age of 57 and 13,843 controls with mean age of 56 who did not have the disease.

Overall, the authors found that breastfeeding was associated with a 24 percent lower risk of invasive ovarian cancer, while breastfeeding for a mean duration of one to three months reduced risk for the disease by 18 percent.

"Our study showed that ever having breastfed was associated with a reduced risk of ovarian cancer, including the high-grade serous type which is the most common and deadly subtype," Sasamoto said. "Importantly, this benefit extends beyond any benefit of pregnancy alone."

Health News // 11 hours ago
Study: Exercise benefits heart, but could increase calcium deposits in arteries
Sept. 20 (UPI) -- Physical activity, though generally beneficial for the heart, may in some cases increase a person's risk for heart disease, a study published Monday by the journal Heart found. 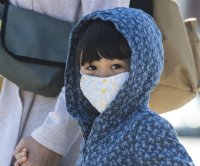