Both prescription and over-the-counter forms of the product affected

Various heartburn relief medicines are displayed in a pharmacy shop in Washington, D.C. The FDA has ordered products containing ranitidine to be removed from shelves over concerns about possible contamination. Photo by Billie Jean Shaw/UPI

April 1 (UPI) -- The U.S. Food and Drug Administration on Wednesday ordered drugmakers to remove all prescription and over-the-counter products containing the agent ranitidine from the market immediately as the agency continues to investigate possible contamination.

Ranitidine is the key ingredient in a number of prescription and over-the-counter drugs used to treat heartburn and acid reflux. The popular product Zantac is one of many that uses ranitidine, the FDA noted.

"The FDA is committed to ensuring that the medicines Americans take are safe and effective," Dr. Janet Woodcock, director of the FDA's Center for Drug Evaluation and Research, said in a press release. "We make every effort to investigate potential health risks and provide our recommendations to the public based on the best available science."

The agency announced in January that it would begin checking all ranitidine-based medications for a contaminant called N-Nitrosodimethylamine, or NDMA, after concerns were first raised last summer. The agency has determined that the impurity in some ranitidine products increases over time and when stored at higher than room temperatures.

Consumers may be exposed to "unacceptable levels" of NDMA as a result, the agency noted. As a result of the FDA's immediate market withdrawal request, ranitidine products will not be available for new or existing prescriptions or over-the-counter use in the United States, effective immediately.

The FDA is also advising consumers taking products containing ranitidine to stop, dispose of them properly and not buy more. For those who wish to continue treating their condition, they should consider using other FDA-approved products, after talking with their healthcare professional.

According to the FDA, NDMA is a probable human carcinogen, or a substance that may cause cancer. Although low levels of NDMA are commonly found in some foods and in drinking water, sustained levels of exposure to higher amounts "may increase the risk of cancer in humans," the agency said.

Initially, the FDA conducted thorough laboratory tests and found NDMA in ranitidine at low levels. However, new testing prompted by information from third-party laboratories confirmed that NDMA levels increase in ranitidine even under normal storage conditions, and NDMA has been found to increase significantly in samples stored at higher temperatures, including temperatures the product may be exposed to during distribution and handling by consumers.

FDA testing also showed that "the older a ranitidine product is, or the longer the length of time since it was manufactured, the greater the level of NDMA."

"We didn't observe unacceptable levels of NDMA in many of the samples that we tested," Woodcock said. "However, since we don't know how or for how long the product might have been stored, we decided that it should not be available to consumers and patients unless its quality can be assured. The FDA will continue our efforts to ensure impurities in other drugs do not exceed acceptable limits so that patients can continue taking medicines without concern." 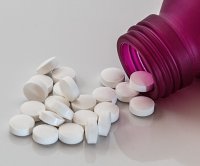 Health News // 16 hours ago
Drinking rose during pandemic, especially for women, Black people
It may seem harmless to while away hours stuck at home during the pandemic with extra wine and cocktails. But new research instead points to a troubling trend: Alcohol use and risky drinking rose in the U.S. last year.