Feb. 10 (UPI) -- The 13th case of the novel coronavirus in the United States has been detected in California, the Centers for Disease Control and Prevention said Monday.

The World Health Organization on Tuesday also officially dubbed the new coronavirus Covid-19 in an effort to ease references to the global outbreak, officials said at a press briefing.

In a statement, the CDC said the patient was among the U.S. citizens who were recently evacuated from the Chinese city of Wuhan, the epicenter of the Covid-19 outbreak that began in December, and was under a federally imposed 14-day quarantine.

"CDC is conducting a thorough contact investigation of the person who has tested positive to determine contacts and to assess if those contacts had high-risk exposures," the statement read.

The CDC confirmed to UPI that the patient was one of the hundreds of U.S. evacuees under quarantine at the Marine Corps Air Station Miramar in San Diego.

More than 800 U.S. nationals have been repatriated from Wuhan since Jan. 29, when the first evacuation flight arrived at the March Air Reserve Base in Riverside, Calif., State Department spokeswoman Morgan Ortagus said in a statement, adding the most recent evacuation flights landed Friday.

News of the infection comes as the first batch of evacuees plans to be released on Tuesday from the base.

RELATED Coronavirus deaths top 1,000 as WHO arrives in China

A total of 195 U.S. nationals, mostly workers with the U.S. State Department and their families, will be released Tuesday after none have tested positive for the virus, Riverside County Public Health Office Cameron Kaiser said.

He said two people with symptoms were retested and their results were negative.

"We are working with state and federal partners to take every precaution to protect this community and will take immediate action if any person being monitored develops symptoms of 2019-nCov," he said in a letter to the local community. "So far, no cases of nCoV have been detected, and we don't expect it to happen, but we are ready if it does."

Evacuees have also been quarantined at Nebraska's Camp Ashland.

Last week, the CDC confirmed the United States' 12th case of the coronavirus as an adult in Wisconsin, stating it is believed the person came into contact with an infected individual while traveling to China.

China on Tuesday confirmed that more than 1,000 people have died amid the outbreak with tens of thousands more infected.

The WHO officially renamed the infection Covid-19 in response to criticism from public health professionals who felt the original name for the virus that has sickened more than 40,000 people in China, 2019 novel coronavirus, or nCoV, didn't reflect the seriousness of the ongoing outbreak.

WHO director general Tedros Adhanom Ghebreyesus said during a press briefing Tuesday that the new name "did not refer to a geographical location, an animal, an individual or group of people, and which is also pronounceable and related to the disease."

"Having a name matters to prevent the use of other names that can be inaccurate or stigmatizing," he added. "It also gives us a standard format to use for any future coronavirus outbreaks.

Health News // 5 hours ago
Obesity increases odds for breast cancer return in survivors, study says
Most people know obesity can lead to diabetes or heart disease, but excess weight can play a role in cancer, too, researchers say.

Health News // 16 hours ago
Many AFib patients wrongly prescribed aspirin therapy, study finds
April 19 (UPI) -- More than one-third of people who have atrial fibrillation or blood clots are treated with both a blood-thinner and daily aspirin therapy, even when there is no clear need for the latter, a JAMA study found.

Health News // 20 hours ago
New treatment for ED after prostate surgery being developed, researchers say
April 19 (UPI) -- Men undergoing surgery for prostate cancer may no longer have to live with erectile dysfunction afterward, thanks to an innovative new treatment, researchers said in a paper published Monday by JCI Insight. 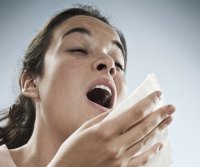 Health News // 21 hours ago
Overlapping symptoms can cause confusion between COVID-19, allergies
Seasonal allergies are striking this year at the worst possible time, with the United States in the midst of a fourth wave of the global COVID-19 pandemic.

Health News // 21 hours ago
Epidural during labor doesn't increase child's autism risk, study finds
April 19 (UPI) -- Babies born to women who use epidurals for pain during childbirth do not carry increased risk for autism, according to an analysis published Monday by JAMA Pediatrics.