Flu cases on the rise nationally, according to the CDC. Photo by Анастасия Гепп/Pixabay

Jan. 10 (UPI) -- Nearly 10 million Americans have been sickened by the flu virus so far this winter, according to the latest figures from the U.S. Centers for Disease Control and Prevention.

In its weekly FluView report, released Friday, noted that the bug has resulted in approximately 87,000 hospitalizations and led to 4,800 deaths. In all, 5.8 percent of all deaths nationwide during the week ending January 4 were caused by pneumonia- and flu-related illnesses.

And, across the country, 32 children have died from the flu.

"Urgent care and primary care offices in our area are packed with patients across the lifespan with flu-like symptoms," Libby Richards, an associate professor at the Purdue School of Nursing and a registered nurse, told UPI.

The CDC estimates that 9.7 million people have had the flu since the 2019-20 season began in earnest -- a significant increase from the 6.4 million the agency projected through the week ending December 28. Notably, approximately one-third of all laboratory-confirmed flu cases across the country involve influenza A, with the remainder being type B. Historically, type B influenza virus has not caused large pandemics.

"Typically we see more cases of type A viruses, but this season we are seeing more cases of type B viruses," Richards noted. "The good news is that both of these virus types are included in this years' vaccine lot, and type B flu viruses don't mutate as quickly as type A, so they don't cause widespread pandemics. Unfortunately, type B viruses have been historically more commonly seen in children."

According to Richards, however, both virus types are highly contagious and cause traditional flu-like symptoms. Historically, influenza type A has been considered more severe, but recent studies have shown both virus types lead to similar rates of hospitalization, she added.

"We are currently in the height of flu season and we likely are not at the peak yet -- meaning, we will likely see the number of flu cases continue to rise," Richards said. "Most often flu season peaks in February. So it is very likely that we will be seeing many more cases of the flu into March and maybe April."

She added that it is "definitely" not too late to get vaccinated, as well as take other precautions to prevent picking up the infection.

"In addition to getting vaccinated, other things we can do to protect ourselves from the flu include proper hand hygiene and wiping down frequently touched hard surfaces like TV remotes, phones, toys, door knobs, light switches toilet handles, with disinfectant wipes," Richards said. "The flu virus can survive on hard surfaces for 24 hours -- think about how many people touch grocery carts or door knobs in that period of time."

Health News // 14 hours ago
Younger U.S. adults three times likelier to die early than peers in Europe
April 12 (UPI) -- Adults in the United States were up to three times more likely to die at a younger age than their peers in Europe, even before COVID-19, according to a Proceedings of the National Academy of Sciences analysis.

Health News // 18 hours ago
Study: High number of meals consumed in U.S. have low nutritional value
April 12 (UPI) -- Many of the meals consumed in the United States have poor nutritional quality, with the most nutritious eaten by children at school, a study published Monday by JAMA Network Open found.

Health News // 20 hours ago
Survey: Relying on TV, social media for COVID-19 news leaves people less informed
April 12 (UPI) -- People who obtain their news about COVID-19 from television and social media are less knowledgeable about the virus, according to the results of a survey published Monday by Current Medical Research & Opinion. 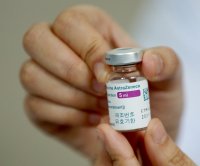