In addition to pain, migraine sufferers often report symptoms such as nausea and sensitivity to light and sound. Photo courtesy of Pixabay

Nov. 19 (UPI) -- Migraine sufferers might soon have a new weapon against the condition's painful symptoms.

In a Phase 3 clinical trial, results of which were published Tuesday in the Journal of the American Medical Association, ubrogepant, manufactured by Allergan, was found to reduce pain and address the "most bothersome" symptoms of migraine headaches.

In addition to pain, migraine sufferers often report symptoms such as nausea and sensitivity to light and sound.

"Ubrogepant has a novel mechanism of action and a favorable safety and tolerability profile," study co-author Dr. Richard B. Lipton, director of the headache center at Montefiore Medical Center in New York City, told UPI.

Lipton said the drug is part of a new class of migraine-specific acute treatments known as "gepants" that target calcitonin gene-related peptide, a key molecule involved in the development of migraine pain and related symptoms.

"Gepants can be taken orally at the time of an attack to relieve pain and other migraine symptoms and restore function," Lipton said, adding that ubrogepant could be an option for patients who cannot safely take triptans, a commonly used class of drugs for the severe headaches, because they have cardiovascular disease.

Triptans have been shown to "constrict blood vessels," which can cause heart attack and stroke, he said.

Allergan received approval of its new drug application for ubrogepant from the Food and Drug Administration in March. The company has said it expects full FDA approval in December. Phase 3 clinical trials that show safety and efficacy of a new drug generally are the final step in the approval process before the FDA acts.

Notably, "absence of the most bothersome" symptom -- pain, nausea or sensitivity to light and/or sound -- was reported by nearly 40 percent of participants who took the 50 mg dose and 34 percent of those who took the 25 mg dose within two hours of taking the drug.

The most common side effects reported were nausea and dizziness. 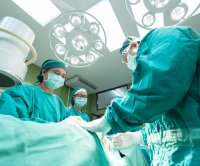 Health News // 11 hours ago
Cancer surgery at leading hospitals up to 30% more expensive, study finds
Aug. 3 (UPI) -- Choosing a leading research institution for cancer care comes with a cost, according to a study published Tuesday by JAMA Network Open.