A 17-year-old male sickened by e-cigarette use had a double lung transplant in October and is now recovering well.

A CT scan of the transplant patients' lungs before surgery shows damaged and dead tissue, and the lungs were devoid of air because of his condition, which doctors say is the result of e-cigarette usage. Photo courtesy of Henry Ford Hospital

Nov. 12 (UPI) -- Physicians at Henry Ford Health System in Detroit on Tuesday announced that they had performed what is likely the first double lung transplant in a patient diagnosed with vaping-related illness.

The surgery took place on October 15, and the care team noted that the patient is recovering well and breathing without assistance, but his recovery is expected to take several months.

According to officials at the hospital, the patient, a 17-year-old male who has requested anonymity, suffered irreparable lung damage resulting from use of e-cigarettes.

"Vaping-related injuries to the lung have become all too common, and I think our adolescents are faced with a crisis," Dr. Lisa L Allenspach, medical director for the Henry Ford Hospital Lung Transplant Program, said at a press conference. "I believe we're just beginning to see the tip of the iceberg. We need to make sure teens are educated on the dangers of vaping."

Researchers at the U.S. Centers for Disease Control and Prevention last Friday said they have linked a spate of vaping-related lung illnesses to the presence of vitamin E acetate in e-cigarettes containing THC, an active ingredient of the cannabis or marijuana plant. More than 2,000 people in the U.S. have become sickened -- and 39 have died -- after reporting the lung illness.

Vitamin E acetate is a petroleum-derived oil used in cosmetics. It is safe when consumed in foods or used on the skin, but has adverse effects on the lungs when inhaled, the CDC researchers said. The liquid appeared on the illicit THC market this spring and was used as a thickening cutting agent for vaping cartridges.

Officials at Henry Ford Health System would not identify the type of e-cigarette the teen used, or confirm whether or not it contained THC.

"We wanted this case to [receive] public attention because of the epidemic of lung injury related to e-cigarette use," said Dr. Hassan W. Nemeh, a thoracic surgeon at the hospital. "This is a senseless disease process and totally preventable."

Without the transplant procedure, "this teenage patient would have faced certain death," he added, noting that scans of the patient's lungs prior to surgery revealed extensive damage and significant dead tissue.

"I've never seen an evil like this before," Nemeh continued.

Despite having what some may describe as a self-inflicted injury, the teen transplant recipient jumped to the head of Michigan's donor lung waiting list because of his age and the fact he was unable to breathe on his own prior to surgery. His care team at Henry Ford added that both the patient and his family have committed to not vaping in the future.

Although the patient and his family have "asked for privacy at this time," officials said, they asked the medical team "to share photographs and an update to warn others" of the dangers of vaping. Neither the patient, nor his family, participated in a press briefing Tuesday, and his name is being withheld at his request.

Allenspach did read a statement written by the boy's parents, which noted that their lives have been "forever changed" by their experience.

If the sharing of their son's story "saves just one person or prevents one person from vaping, we're making a step in the right direction," the statement continued.

Double lung transplants have been safely performed in the United States for 30 years, according to Allenspach. Median survival following the procedure is seven years, but given the patient's young age, she said, he is expected to live a long, healthy life. He is expected to make a full recovery and return to school and other activities -- although doctors are still not sure when, she added. 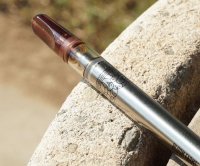 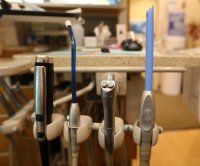