Within 10 months of cutting sugary drinks by almost 50 percent, their collective waist size of employees at University of California, San Francisco, had shrunk by almost an inch. Photo courtesy of HealthDay News

After the University of California, San Francisco, banned sales of sugary drinks, employees started downing less liquid sugar -- and their waistlines showed it.

In a before-and-after study, researchers found that the ban, begun in 2015, cut employees' intake of sugary drinks by almost 50 percent. And within 10 months, their collective waist size had shrunk by almost an inch.

The university is one of a growing number of employers that have stopped selling sugar-laden beverages -- in cafeterias and vending machines -- in a bid to promote healthier lifestyles. But whether it's working has been unknown.

The new study, published online Oct. 28 in JAMA Internal Medicine, is the first to gauge the effects.

Among 214 employees who were heavy consumers of sugary drinks before the ban, the average daily intake of those beverages dropped by 48 percent within 10 months. Specifically, they went from downing 35 ounces per day, on average, to 18 ounces.

RELATED Top-selling children's drinks out of line with health recommendations

The reduced consumption was based on what the workers reported, which, Schmidt acknowledged, can be influenced by social pressure.

But the researchers also had biological evidence to back up employees' claims. People who reported bigger reductions in sugary drinks also showed more improvement in their sensitivity to insulin -- a key hormone in regulating blood sugar. Problems with insulin sensitivity can be a precursor to type 2 diabetes.

And then there was the change in belly size. Across the whole study group, average waist circumference dipped by just under an inch.

"The idea that you can tweak this one thing and show that kind of effect is pretty exciting," Schmidt said.

The policy removed all sugar-added drinks from the university's cafeterias, vending machines and food trucks -- allowing only the sale of bottled water, diet drinks, unsweetened tea and 100% fruit juice.

In addition, more water stations were set up across campus, and there was an educational campaign to explain the motivation to employees, Schmidt said. Given that the university is a health sciences campus, she noted, there was a special element to those motives: Isn't it against the campus's mission to be selling sugar?

Education, the study suggested, seems to go a long way.

Of the 214 employees the researchers studied, half were randomly assigned to a "motivational intervention" at the outset. It involved a 15-minute interview with a health educator who talked to them about the health effects of sugar, and how to cut back.

It turned out that those employees were more successful in curbing their sugary drink intake -- slashing it by over 25 ounces a day, on average.

Jennifer Harris is director of marketing initiatives at the University of Connecticut's Rudd Center for Food Policy & Obesity. She said, "I think it's a great policy, and it's great they actually saw benefits. You could argue that employees would just get their sugar-sweetened beverages elsewhere."

But, she said, the policy might have offered workers a "reminder" that the drinks are not healthy choices.

"Sugar-sweetened beverages are the biggest [source] of sugar in people's diets," Harris said.

And cutting them out has no downside, Schmidt pointed out, since they offer no needed nutrients.

Could such a policy work outside of a San Francisco medical campus? The employees in this study were not a bunch of professors and doctors; more often, they were in service or technical areas, including cafeteria workers who formerly had access to all the sugar they could drink.

But, Schmidt said, more research is needed to test sugary drink bans at various workplaces, in different areas of the country.

The researchers are now studying the effects of a sales ban at a group of California hospitals. Health systems in other states -- including the Cleveland Clinic, University of Michigan, Baylor in Texas, and Geisinger in Pennsylvania -- have also instituted sales bans.

The American Heart Association has advice on avoiding added sugars.

Health News // 21 hours ago
Babies identify close relationships by saliva, study suggests
Sharing food and smooching are two ways babies can suss out whom they can depend on to take care for them, a new study suggests. 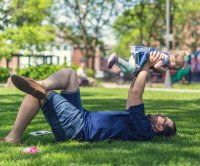 Health News // 22 hours ago
Vast number of new dads lead unhealthy lifestyles, survey finds
Jan. 21 (UPI) -- About 70% of new fathers in the United States are overweight or obese, while one in five is a smoker, according to the results of a national survey published Friday by the journal PLOS One. 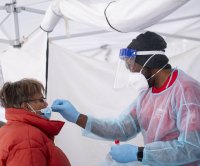 Health News // 23 hours ago
CDC: Vaccines less effective against Omicron, but still reduce risk for serious illness
Jan. 21 (UPI) -- The COVID-19 vaccines available in the United States were less effective at preventing against infection after the Omicron variant of the virus emerged in November, according to data released Friday by the CDC.