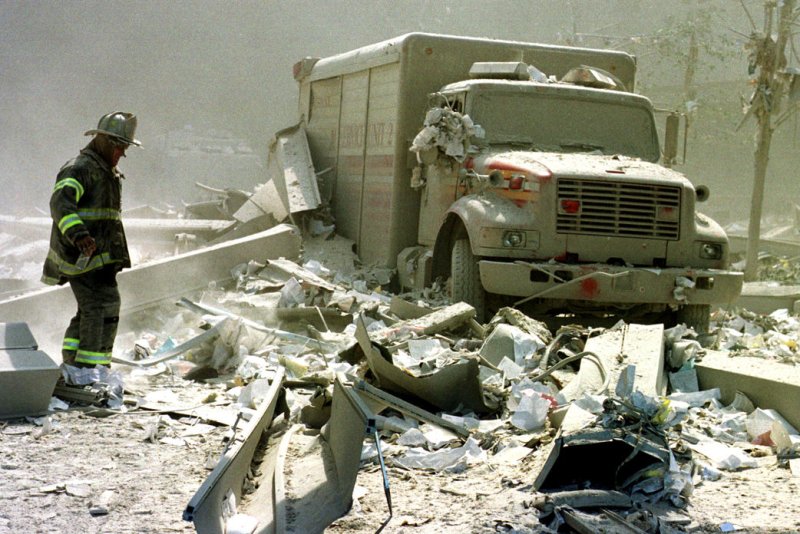 The firefighters who flooded into Ground Zero on 9/11 put their lives on the line to help others. Now, a new study shows they are still paying the price for their selflessness.

Those who were first on the scene or worked for months among the ruins of the World Trade Center disaster in 2001 have an increased risk of heart disease, stroke and heart attack that persists to this day, researchers report.

Their exposure to the airborne dust and fine particles created by the collapse of New York City's Twin Towers is wreaking long-term havoc on the health of their blood vessels and heart, experts said.

Firefighters first on the scene have a 44 percent increased risk of heart attack, stroke, heart disease, sudden heart death, cardiac surgery or other life-threatening heart problems, when compared against those who arrived later in the day, researchers found.

The risk from exposure to the World Trade Center disaster was about the same as that associated with chronic high blood pressure, said Dr. Jacqueline Moline, vice president of occupational medicine, epidemiology and prevention for Northwell Health in Manhasset, N.Y.

"The concern is the dust was pro-inflammatory," said Moline, who treats World Trade Center survivors. "It makes it more likely for particles and platelets and other substances to aggregate in the coronary arteries, and that can lead to more deposits, more plaque, more build-up, more blockage."

Prior studies have linked World Trade Center exposure with respiratory problems, post-traumatic stress disorder (PTSD) and several types of cancer, researchers said in background notes. However, studies of the site's effect on heart health up to now have produced inconsistent results.

For this study, researchers led by Rachel Zeig-Owens and Hillel Cohen, from the Department of Epidemiology and Population Health at Albert Einstein College of Medicine in New York City, tracked 16 years of health records for nearly 9,800 New York City firefighters who worked at Ground Zero.

They divided the firefighters into four groups:

These firefighters all were very healthy people who had to undergo regular stress tests, breathing tests and physical examinations as part of their job, said Dr. Mary Ann McLaughlin, a cardiologist at Mount Sinai Hospital in New York City.

Three-fourths of the firefighters had never smoked, and were generally in great physical shape prior to 9/11, researchers said.

"These were all healthy workers at the onset of the study," McLaughlin said. "They excluded anyone from the study who had prior heart disease."

The results show that exposure to air pollution from the World Trade Center is a heart risk factor all on its own, after accounting for other risk factors like high cholesterol, smoking, excess weight, elevated blood pressure, diabetes and smoking.

"The typical risk factors were present, but the World Trade Center added an additional risk," Moline said, though the study could not prove that exposure actually caused heart risks to rise.

The greatest heart health problems were faced by those first on the scene, but working a long time at Ground Zero also created an increased risk, researchers found.

"They didn't have that acute high exposure on that first day, but they had continued lower levels of exposure," Moline said of people who worked six months or more at the site.

It's very likely that the heart risk posed by exposure at Ground Zero is even greater than observed in this study, McLaughlin said.

"They may even be underestimating the results of the exposure, because the people they compared to did have some exposure, just less exposure," McLaughlin said. "The absolute risk of heart disease may even be more if you compared them to a control group that was never exposed."

Fine particles that are inhaled can make their way into a person's bloodstream, contributing to inflammation and stiffening of the arteries much in the same way as cigarette smoking, McLaughlin and Moline said. Previous environmental studies have linked particle air pollution to heart health problems.

"We know obstructive sleep apnea is considered a World Trade Center condition in those who have chronic sinusitis and snoring," McLaughlin said. "Sleep apnea is an important risk factor for heart disease as well."

These results show that people who volunteered at Ground Zero need to pay particular attention to their heart health, Moline said.

In the years to come, it will be crucial that they eat right, exercise, control their blood pressure and cholesterol, and avoid smoking, she said.

"We know you can control all those other risk factors that are still going to be there, so it's really important for anyone who had World Trade Center exposure that they take care of their heart and achieve good heart health," Moline said.

The findings were published Sept. 6 in the journal JAMA Network Open.

The U.S. Environmental Protection Agency has more about the heart health effects of particle pollution.