Body's natural chemicals may have protected some 9/11 responders, study says 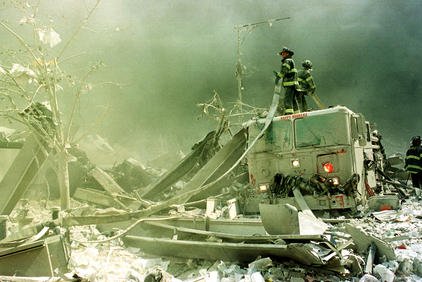 A firefighter walks among the rubble near the World Trade Center 1 building following a terrorist attack on September 11, 2001, in New York City. File Photo by Monika Graff/UPI | License Photo

Certain chemicals made by the body may have helped prevent lung disease in some first responders who were exposed to toxic dust after the World Trade Center was destroyed on Sept. 11, 2001, researchers say.

The investigators, from New York University School of Medicine, identified 30 metabolites -- chemicals made as the body breaks down fats, proteins and carbohydrates -- associated with a lower risk of obstructive airway disease (OAD) in the first responders. OAD hinders air flow out of the lungs.

While first responders who did not develop OAD had low levels of these metabolites, their levels where higher than those who developed lung disease since 9/11.

For the study, the researchers analyzed blood samples from 14,000 firefighters and EMS workers who worked at the World Trade Center disaster site in New York City. Their lung function was tested before the event, after, and every year since. The findings suggest that it may be possible to use drugs, diet and exercise to boost levels of these metabolites to protect other people exposed to toxic particles created by fire and smoke.

Researchers said the protective metabolites include protein-building amino acids and omega-3 fatty acids, which are easily obtained by diets high in fish and olive oil, such as the Mediterranean diet.

"By combining the results of our studies to date, we are closer to predicting who gets lung damage. This, in turn, offers unique opportunities for better diagnosis and prevention of obstructive airway disease moving forward," Nolan said in a university news release. The study was published online Sept. 3 in the journal Scientific Reports.

In a previous study, the same team identified more than two dozen other metabolites found at lower levels in firefighters who did not develop lung disease, suggesting that those metabolites are not protective.

The American Lung Association offers tips to protect your lungs.