The Centers for Disease Control and Prevention said 1,001 people have been sickened by the contagious disease in 2019. The agency made the announcement two days after its regular weekly outbreak update.

On Monday, the CDC said 981 illnesses had been reported.

"The 1,000th case of a preventable disease like measles is a troubling reminder of how important that work is to the public health of the nation," Azar said of the HHS' efforts to promote safety and vaccinations.

RELATED Officials: Travelers may have caught measles at DFW Airport

"We cannot say this enough: Vaccines are a safe and highly effective public health tool that can prevent this disease and end the current outbreak," he added.

The occurrences are largely linked to travelers who returned from countries with large measles outbreaks, including Israel, Ukraine and the Philippines. The CDC said the majority of those infected in the United States were unvaccinated

The agency said the virus can spread when people within a community remain unvaccinated, and when people arrive in the United States after contracting the virus abroad.

Measles spread among unvaccinated people in Orthodox Jewish communities in New York State, New York City, and New Jersey after travelers returned from Israel with the virus. As a result, New York City has ordered mandatory vaccinations, and religious leaders have urged their followers to get vaccinated.

The symptoms of measles usually appear between seven and 14 days after infection. The signs include high fever, couch, runny nose, rash, and red, watery eyes. 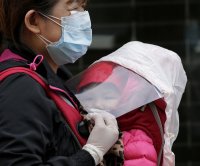 Health News // 1 hour ago
Study: Heart function returns quickly in children with COVID-19-related MIS-C
Jan. 19 (UPI) -- Most children who develop a rare, but sometimes severe, heart complication due to COVID-19 recover quickly, a study published Wednesday by the Journal of the American Heart Association found.

Health News // 3 hours ago
Study: Opioid addiction treatment in jail reduces re-arrest risk after release
No magic bullet exists for ending the U.S. opioid crisis, but there's hopeful news for one high-risk population: Providing addiction medication in jails reduces the odds of addicts being re-arrested after their release.

Health News // 22 hours ago
Study: Blood tests assessed via machine learning can predict COVID-19 survival
Jan. 18 (UPI) -- Blood samples collected from patients with severe COVID-19 can be analyzed by a machine learning approach to predict whether they will recover and survive or die from the disease, a PLOS Digital Health study found.

Health News // 23 hours ago
Chronic conditions increase risk of severe COVID-19 in children
As a record number of American kids are being hospitalized with COVID-19, a new study helps clarify which ones are at the highest risk for serious complications.