Colon cancer rates rise for those under 50, many in western states

Colon cancer rates among those under 50 in the United States are rising, and they're rising the most rapidly in western states, a new study finds.

"It was surprising that the largest increases were in the West, where you have more healthy behaviors," said lead researcher Rebecca Siegel, scientific director of surveillance research at the American Cancer Society.

The question is why are rates of colon cancer rising among younger adults, and why is the fastest growth in the West? The answer to both of these questions is unknown, Siegel said.

"We did this study to find clues to what might be causing the increase," she said. "We expected the larger increases in southern states, where most cases occur, but that wasn't what we found."

What the researchers did find was that the largest increase in colon cancer rates was in western states. The average rate of colon cancer increased nearly 3% a year in 10 states, six of which were in the West.

Siegel added that the rates for rectal cancer showed an even greater increase, doubling in some states. For example, in Colorado, the rates went from two per 100,000 to four per 100,000, she said.

In terms of populations, the greatest increase in colon cancer rates was among whites in 40 out of 47 states.

These findings are based on an analysis of colon and rectal cancer cases among people aged 20 to 49 from the North American Association of Central Cancer Registries and national survey data.

Although still fairly rare in the young, colon cancer rates have been rising in recent years. Overall, cases of colon cancer among those under 50 have increased 1 percent a year between 2006 and 2015, and the rate of rectal tumors has gone up nearly 2 percent each year, the study found.

According to Dr. Andrew Chan, an associate professor of medicine at Harvard Medical School in Boston, "The rising rates of early-onset colorectal cancer has been a puzzle to the medical community. Although several theories have been proposed, none have been conclusively proven."

Some have thought that increases in risk factors such as obesity might be at play, Chan said. The increasing rate of colon cancer in the West, where obesity is less prevalent, seems to challenge that assumption, he added.

"Other risk factors, particularly early in life, are likely to be important and need to be identified," Chan said.

Siegel said that obesity and alcohol consumption, which have been believed to be driving the increase, may not be the relevant factors.

"We did not find a significant correlation between the two," she said. "Perhaps something other than the usual suspects is behind the increase."

Adding to the mystery, Siegel said, recent studies have shown similar trends in Canada and Australia.

Steps you can take to reduce the risk of colon and rectal cancer include a healthy diet that limits red meat, limiting alcohol, getting plenty of exercise and maintaining a healthy body weight, she said.

The findings were published May 29 in the Journal of the National Cancer Institute.

Dr. Alfred Neugut, co-director of the Cancer Prevention Program at NewYork-Presbyterian Hospital in New York City, said that why anyone -- not only young adults -- develops colon cancer isn't known.

"Overall, colon cancer rates are plummeting," he said. "Why they are going up in young adults -- nobody knows the answer."

Neugut said that symptoms of possible colon cancer include blood in the stool and persistent abdominal cramps.

Doctors seeing young adults with these symptoms should consider that it might be colon cancer. Often that possibility is overlooked, and once that cancer is found, it's at an advanced stage, he said.

Because it is still so rare, Neugut doesn't think that all young adults should be screened for colon cancer. But people with a family history of the disease should have a talk with their doctor about when screening should start.

Recently, the American Cancer Society lowered the age to start colon cancer screening from 50 to 45, and to 40 for those with a family history of the disease, Siegel said.

Visit the American Cancer Society for more on colorectal cancer. 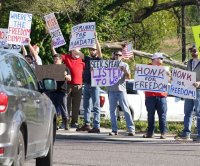