Social comparison is when a person evaluates their life by contrasting it to someone else's, and researchers say social media users should be aware of it to prevent its affects on their mental health. Photo by John Angelillo/UPI | License Photo

Jan. 8 (UPI) -- New research links Facebook to the perception of poor health among its users.

People on Facebook thought they had more symptoms of physical ailments like sleep problems and weight change after comparing themselves to other users, a study published Tuesday in Heliyon reported.

"Comparing ourselves to others is not a new concept," Bridget Dibb, a senior lecturer in health psychology at the University of Surrey, said in a press release. "However, with the rise of social media it is becoming a part of our everyday lives."

The researchers evaluated what study participants believed about their own self-esteem, physical health and life satisfaction compared to other Facebook users.

"An entity like Facebook, with 2.27 billion active monthly users, has never existed before. The long term effect it has on individuals is unknown, but it is clear that comparison with others is associated with perceptions of ill-health," Dibb said.

Social comparison is when a person evaluates their life by contrasting it to someone else's.

Female users and people who suffer from anxiety and depression had even stronger perceptions of physical symptoms of ailments. Researchers report that the more people use Facebook, the more opportunities they have to view themselves unfavorably to others -- particularly in areas related to health and lifestyle.

The belief is that people develop mental illness after using Facebook, among other social media, to fill gaps in their own lives.

"Users need to be aware of how they feel when they use sites like Facebook and recognize the dangers of comparisons in this context," Dibb said.

Health News // 10 hours ago
Study shows Pfizer vaccine booster produces antibodies after 4 months
Jan. 24 (UPI) -- Antibodies capable of countering the Omicron variant of the COVID-19 virus still are present in the body four months after a booster shot of the Pfizer-BioNTech vaccine, researchers have reported. 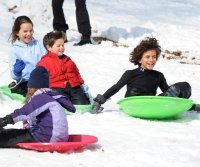 Health News // 17 hours ago
Most kids don't wear helmets while sledding, survey finds
When American kids do downhill skiing or snowboarding, they almost always wear a helmet, their parents say, but they're far less likely to do so when cruising down a neighborhood hill on a sled. Health News // 17 hours ago
Weight loss before fertility treatment may not affect odds of success
Losing weight before beginning fertility treatment doesn't boost the odds that a woman who is obese will have a successful pregnancy, a new study shows.

Health News // 18 hours ago
U.S. teens were in mental health crisis before COVID-19
American teenagers are facing what amounts to a mental health crisis, experts say. They already faced significant challenges, and the COVID-19 pandemic has only made them worse.
Advertisement