Engineers at the Massachusetts Institute of Technology who developed the method found it could enhance the T cells' activity without harmful side effects.

In a study published Monday in the journal Nature Biotechnology, the researchers report that 60 percent of treated animals' tumors disappeared completely in an early test of the method.

The drugs are made of a gel from molecules of cytokine IL-15 held together by a cross-linker that degrades when the T cell reaches a tumor and is activated. Nanoparticles are between 1 and 100 nanometers in size -- comparatively, a human hair is 75,000 nanometers thick.

"We found you could greatly improve the efficacy of the T cell therapy with backpacked drugs that help the donor T cells survive and function more effectively," senior author Dr. Darrell Irvine, a professor of biological engineering, materials science and engineering at MIT, said in a press release. "Even more importantly, we achieved that without any of the toxicity that you see with systemic injection of the drugs."

Irvine is planning clinical trials of the method later this summer with the company he co-founded, Torque Biotherapeutics. They want to see whether drugs other than IL-15 might be even more effective at stimulating T cells.

Researchers have already found some success in reprogramming the body's immune system to attack cancer cells to treat blood cancers such as lymphoma and leukemia. But they say it's been more difficult to attack solid tumors, including breast and lung cancers.

"The general idea is to grow up large numbers of T cells that are tumor specific and then infuse them in patients," Irvine said of the approach called adoptive T cell therapy.

Two methods have shown some success against lymphomas and leukemias.

One way is to remove tumor-specific T cells from a tumor biopsy, grow them in a lab dish and return them to the patient. Another way is to obtain circulating T cells from blood, genetically modifying them to target a protein found on the tumor cell's surface or expose them to tumor proteins so that T cells will work against them.

With solid tumors, success has only been seen by injecting immune-stimulating drugs called cytokines along with the T cells. But they have led to harmful side effects, including inflammation.

The MIT researchers have been attempting to stimulate only the tumor-specific T cells. In 2010, they attached tiny spheres called liposomes to the tumor-targeting T cells, but the particles could only carry a small amount of the drug and they released the medication almost immediately after the T cells were injected.

In the latest study, the researchers created a new type of nanoparticle that can carry 100 times more of the drug than it could previously, and medication is not released until after the T cells encounter the tumor.

"That allowed us to link T cell activation to the drug release rate," Irvine said. "The drug is most efficiently being released at the sites where you want it and not in some healthy tissue where it might cause trouble."

They conducted the tests in mice -- genetically engineered to express a T cell receptor that targets a protein found in melanoma tumors -- with success. They were also able to give the mice eight times as much IL-15 without side effects, compared to injections throughout the body.

The researchers found that these nanoparticles, when attached to genetically modified human T cells, were able to kill glioblastoma cells much more effectively.

Irvine said he plans to test the method against other kinds of cancer, both solid and blood, and experiment with other drugs in the hope of finding something more effective than IL-15.

Health News // 1 hour ago
More teens in mental crisis boarded in hospital ERs during pandemic
The COVID-19 pandemic and the isolation it imposed took a dramatic toll on kids' mental health, increasing the demand for services in an already overburden 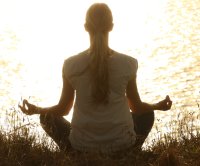 Health News // 4 hours ago
Increasing green space in cities may save thousands of lives
Creating more parks and other green spaces could have prevented tens of thousands of deaths in dozens of large U.S. cities over the past two decades, a new study says.

Health News // 21 hours ago
One dirty pool can spread many cases of E.Coli, experts warn ahead of summer
As the weather warms and families flock to pools, dirty water may dampen the fun. Swimmers at a Pennsylvania community pool learned that the hard way in June 2021 when more than a dozen kids were sickened by bacteria.

Health News // 22 hours ago
Low-income heart attack patients at greater risk for death
If you're poor and have a severe type of heart attack, the chance you'll live through it is significantly lower than that of someone with more money, new research shows.
Advertisement