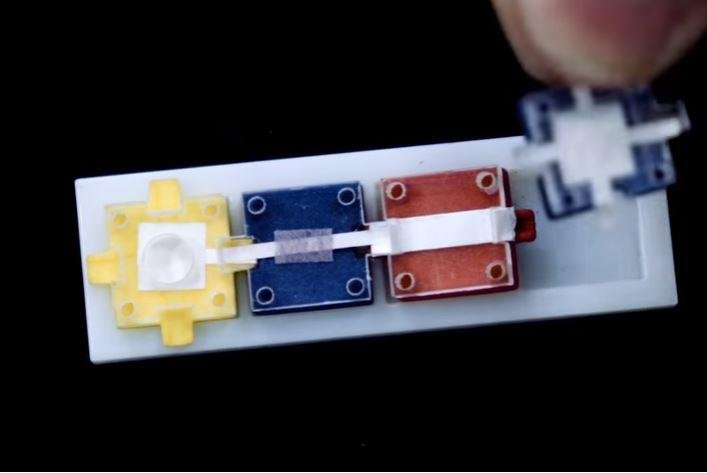 Color-coded Lego-like devices, referred to as "plug-and-play" devices, developed at MIT can easily perform diagnostic tests at a fraction of the cost of traditional methods. Photo courtesy of MIT Little Devices Lab

July 5 (UPI) -- Researchers at MIT have developed Lego-like devices -- referred to as "plug-and-play" -- that easily can perform diagnostic tests at a fraction of the cost of traditional methods.

MIT's Little Devices Lab in Massachusetts engineered the system, called Ampli blocks, that can, for example, be altered to test blood glucose levels in diabetic patients or detect viral infection. They are working on additional devices to detect cancer, the Zika virus, malaria, Lyme disease and other infectious diseases.

The devices cost about 6 cents for four blocks and, unlike traditional diagnostic methods, they don't require refrigeration or special handling -- which means they could be particularly useful in the developing world.

During the last decade, other researchers have worked on small, portable diagnostic devices with chemical reactions that occur on paper strips, similar to those used in home pregnancy tests. But Gomez-Marquez said many of the devices are not designed with large-scale manufacturability in mind, including mass production for diseases that don't affect large numbers of people.

"Some very good work has been done in generating modular silicone-based microfluidics," Gomez-Marquez said. "Paper remained elusive because everyone has focused on the simplicity of paper, not the time and dexterity it takes to tune the engineering around paper."

The Little Devices Lab researchers created about 40 different building blocks and color-coded them by function.

The blocks include a sheet of paper or glass fiber sandwiched between a plastic or metal block and a glass cover. The blocks are about half an inch on each side -- some include channels for samples to flow straight through, others some have turns or other features -- and they snap together along any edge.

"We've had 5-year-olds assemble the blocks and run basic chemical assays through them," Gomez-Marquez said. "Our library of available reaction is growing, and making an assay can be as simple as connecting Ampli blocks together. Eventually advanced users will want to tune and modify the underlying chemistry which requires some more exposure to basic biochemistry methods to deposit new reagents into the system."

He said users won't require any training "if we do a good job."

Aside from being inexpensive to make, researchers say the blocks outperform some previous versions of paper diagnostic devices. They found a sample can be run over a test strip multiple times, enhancing the signal. For example, urine and saliva samples dilute more than blood samples.

The researchers plan to eventually launch a company to manufacture and distribute the kits, which they expect will allow others to use the blocks to generate their own tests and reactions.

In the meantime, the lab is giving the devices away to qualified users in beta kits, including to labs in Chile and Nicaragua, where they have been used to develop devices to monitor patient adherence to TB treatment and to test for a genetic variant that makes malaria more difficult to treat.

"We aim to demystify the process of rapid point of care generation and replication and make it as easy to use as a medicine cabinet thermometer," Gomez-Marquez said.

"We're currently starting by partnering with local retail laboratories around the world that already do routine assay work and have not been able to generate rapid tests, only use them. Eventually, we see just-in-time manufacturing and design of Ampli tests as an extension of a how patients get personalized medical treatment."