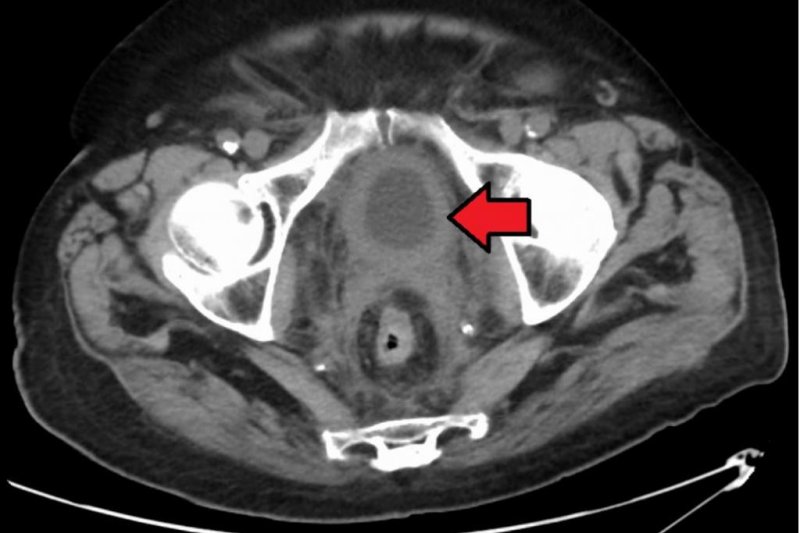 The arrow shows where the bladder wall has thickened due to cancer. Researchers have developed a simple test that can cut down on care costs, over-treatment and side effects for bladder cancer. Photo by Dr. James Heilman/Wikimedia Commons

June 28 (UPI) -- For patients with bladder cancer, a simple test can cut down on care costs, overtreatment and side effects, according to a study.

Georgetown-led investigators said their test significantly and more inexpensively improves the identification of bladder tumors that likely will become invasive. Their findings were published Thursday in Clinical Cancer Research.

In 2018, the American Cancer Society estimates there will be 81,190 new cases of bladder cancer and 17,240 deaths due to the disease in the United States.

Dr. Todd Waldman, a professor of oncology at Georgetown's Lombardi Comprehensive Cancer Center, said the study "validates this test that helps predict whether an early stage bladder cancer will recur and progress."

Among patients treated for early stage lesions that didn't invade the bladder wall, 30 percent will not have lesions recur, Waldman said. Twenty percent of those with a recurrence will develop an invasive cancer.

In the current diagnostics, patients undergo a cystoscopy, in which a lighted optical scope examines the inside of the bladder. This occurs every three months for two years after removal of the tumor, and every six to 12 months afterward.

In the test, 52 percent of the tumors with intact STAG2 expression recurred, compared to 25 percent without them. And in terms of progression, 38 percent recurred with the STAG2 and 16 percent without.

The test examines bladder tumors that had been removed during initial surgery for over-expression of the STAG2 gene, which Waldman found is linked to development of potentially deadly bladder tumors.

He said it's a "very simple and very robust" procedure for pathologists.

And the patients will avoid constant surveillance and possibly aggressive treatment that can produce significant side effects.

"We are closer to our goal of lowering the risk of both aggressive bladder cancer and over-surveillance and treatment side effects in bladder cancer patients," Waldman said.

In 2017, researchers from the University Hospital of Lyon in France developed a simple urine test to more accurately predict the recurrence of bladder cancer as well. They tested the urine of 348 bladder cancer patients for a faulty protein known as TERT.

Health News // 13 hours ago
Opioids not needed for dental pain, clinic's research shows
Aug. 17 (UPI) -- A dental clinic that stopped prescribing all opioids reported in a medical journal Wednesday that its patients did fine, and that the decision most likely helped many patients steer clear of opioid abuse.

Health News // 16 hours ago
Cannabis dispensaries may give bad advice to cancer patients
Cancer patients who use cannabis to relieve pain and improve appetite may be getting bad advice from dispensary staff, a new study suggests.

Health News // 16 hours ago
Psychiatrists' group rolls out model to address shortage of beds
The American Psychiatric Association (APA) is rolling out a new model that can help communities determine exactly how many psychiatric beds they need.

Health News // 18 hours ago
Wind instruments no worse than talking, breathing for spreading COVID-19
A new study finds that the aerosols produced by wind instruments like trombones and flutes are no more concerning than those given off during normal speech and breathing.

Health News // 20 hours ago
Study: Many people unaware they're infected may be spreading COVID-19
Aug. 17 (UPI) -- Many people infected with COVID-19's Omicron variant may be unaware they have the highly contagious virus and contribute to its rapid spread within communities, a new study suggests.

Health News // 1 day ago
Study: Tiny infants born to White mothers stand best chance of better care
Aug. 16 (UPI) -- The rate of medical efforts to save very premature infants increased significantly across the United States from 2014 to 2020, but such babies born to racial and ethnic minorities were less likely to receive it.
Advertisement

Study: Many people unaware they're infected may be spreading COVID-19