Researchers say incomplete reporting of overdose deaths -- coroners and medical examiners did not specify on death certificates that opioids were a contributing cause -- has led to the incorrect data.

Researchers say part of the explanation is a patchwork system of coroners and medical examiners who may have differing levels of training or incorrect expertise for using toxicology reports, among other information, for death certificates. Photo by chuck stock/Shutterstock

Incomplete reporting of overdose deaths can hamper efforts to fight the nation's opioid epidemic, according to the University of Pittsburgh researchers.

They said that as many as 70,000 opioid overdose deaths were not included in nationwide estimates between 1999 and 2015, because coroners and medical examiners did not specify on death certificates that opioids were a contributing cause.

In five states -- Alabama, Indiana, Louisiana, Mississippi and Pennsylvania -- more than 35 percent of overdose deaths were listed on death certificates as unspecified, according to the study.

There were wide state-to-state differences in unspecified overdose deaths, ranging from fewer than 10 in Vermont to 11,152 in Pennsylvania.

States with a county coroner system or a hybrid system of county coroners and state medical examiners tended to have a higher percentage of unspecified overdose deaths, the study found.

Lead author Jeanine Buchanich said coroners may not have medical training useful for completing drug information for death certificates based on toxicology reports. She added that states with a decentralized or hybrid system tend to have less standardization and gaps in reporting accuracy.

"Proper allocation of resources for the opioid epidemic depends on understanding the magnitude of the problem," Buchanich said in a university news release. She is a research associate professor in the School of Public Health.

"Incomplete death certificate reporting hampers the efforts of lawmakers, treatment specialists and public health officials. And the large differences we found between states in the completeness of opioid-related overdose mortality reporting makes it more difficult to identify geographic regions most at risk," Buchanich said.

RELATED Study: Too few receive meds that can cut deaths from opioid abuse

The study was published June 27 in the journal Public Health Reports.

The U.S. Centers for Disease Control and Prevention has more on opioid overdose.

Health News // 17 minutes ago
Getting kids' asthma under control reduces opportunities for bullies
One in 10 children with asthma say they have been bullied or teased as a result of their condition, but tight asthma control seems to keep bullying at bay, a new study suggests. 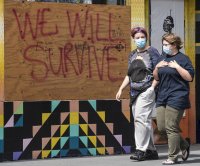 Health News // 7 hours ago
Omicron variant another hit to mental health of exhausted U.S. population
The COVID-19 pandemic brought panic, with waves of infection and death, including the Delta variant this year. Vaccines offer some hope, but the Omicron variant is sending people on another emotional roller coaster.

Health News // 8 hours ago
MRI may spot concussion-linked CTE in living patients
The concussion-linked brain condition known as chronic traumatic encephalopathy can only be diagnosed after death via autopsy. But a new study suggests that MRI may be able to detect CTE while people are still alive. 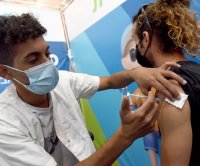 Health News // 18 hours ago
Half of drinkers who think they're OK to drive are wrong, study says
If you think you're fine to drive after drinking, there's a good chance you're wrong, new research shows. Despite being over the legal driving limit, half of the study's participants believed they were safe to drive.

Health News // 21 hours ago
Study suggests time of day for COVID-19 shot may affect immune response
Can the time of day you get your COVID-19 vaccine affect the antibodies you'll make? A new study suggests that it can, though researchers emphasize that getting vaccinated, no matter the time, is a critical decision.

Health News // 22 hours ago
Study: Binge drinking up among older men, but not women
Dec. 8 (UPI) -- Binge drinking was on the rise among older men in the United States before the COVID-19 pandemic struck early last year, a study published Wednesday by the Journal of the American Geriatrics Society found.
Advertisement