Herpesvirus may contribute to Alzheimer's development

Researchers believe viral species may play a role according to an Alzheimer's disease in a study of brain samples from people with and without the disease. Image courtesy of Mount Sinai School of Medicine

June 21 (UPI) -- Certain species of herpesviruses may play a role in Alzheimer's disease according to a study of brain samples from people with and without the disease.

Researchers made the discovery after examining data from brain banks and cohort studies that are part of the Accelerating Medicines Partnership -- Alzheimer's Disease consortium. But the researchers, who published their findings Thursday in the journal Neuron, emphasize that their research doesn't prove that the viruses cause the onset or progression of Alzheimer's.

Currently, no effective prevention or treatment exists for this progressive deterioration of brain tissue, memory and identity, but researchers are hopeful that new, better treatments can emerge as a result of their work.

"The hypothesis that viruses play a part in brain disease is not new, but this is the first study to provide strong evidence based on unbiased approaches and large data sets that lends support to this line of inquiry," Dr. Richard J. Hodes, the National Institute on Aging director, said in a press release by the National Institutes of Health, the parent agency. "This research reinforces the complexity of Alzheimer's disease, creates opportunities to explore Alzheimer's more thoroughly, and highlights the importance of sharing data freely and widely with the research community."

The loss of cognitive functioning in Alzheimer's disease, an irreversible and progressive brain disorder, has been found to be a mix of different disease processes in the brain, rather than just one, such as buildup of amyloid or tau proteins.

Researchers have been attempting to identify links to viruses and, ultimately, new treatment strategies.

Scientists from Mount Sinai's Icahn School of Medicine and Arizona State University's Banner Neurodegenerative Disease Research Center are seeking to find whether drugs used to treat other diseases can be used for treating Alzheimer's.

They found that Alzheimer's biology is likely impacted by a complex group of viral and host genetic factors. They identified specific testable pathways and biological networks.

"This is the most compelling evidence ever presented that points to a viral contribution to the cause or progression of Alzheimer's," study co-author Dr. Sam Gandy, a professor of neurology and psychiatry at Mount Sinai, said in a press release. "A similar situation arose recently in certain forms of Lou Gehrig's disease. In those patients, viral proteins were discovered in the spinal fluid of some Lou Gehrig's patients, and patients with positive viral protein tests in their spinal fluid showed benefit when treated with antiviral drugs."

They found that human herpesvirus 6A and 7 were up to twice as abundant in Alzheimer's disease samples than non-Alzheimer's ones.

They also found that multiple points overlapped between virus-host interactions and genes associated with Alzheimer's risk, and multiple viruses that impact Alzheimer's disease were found in DNA, RNA and proteins.

"We didn't go looking for viruses, but viruses sort of screamed out at us," said Dr. Ben Readhead, an assistant research professor in the NDRC at Arizona State. "We were able to use a range of network biology approaches to tease apart how these viruses may be interacting with human genes we know are relevant to Alzheimer's."

Researchers said previous studies suggest a viral contribution but don't explain how the connection works. They said their findings were more specific but they still don't determine the risk and susceptibility .

Instead, scientists say further work will test whether herpes virus activity is one of the causes of Alzheimer's.

"What this does is further strengthens the emerging theme that DNA immune system plays a role in Alzheimer's and why that gives us hope is that it will reveal a whole set of new potential drug targets for Alzeimer's and perhaps borrow a lot of the tools and drugs from immunology for Alzheimer's disease," said study's senior author Dr. Joel Dudley, director of the Institute for Next Generation Healthcare at the Icahn School. 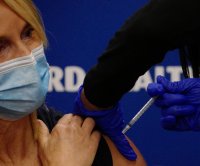 Health News // 3 hours ago
Nearly all U.S. physicians vaccinated against COVID-19, poll says
While COVID-19 vaccination rates may lag among some groups, that's not the case for practicing physicians in the United States. More than 96% of physicians in the country have been vaccinated, a new survey found.

Health News // 9 hours ago
Study: Odds for death, hospital care rise when statins are stopped
Living longer often means living with multiple health problems and many medications to manage them, leading doctors to try to discontinue some drugs -- but a new study says statins shouldn't be one of them.

Health News // 20 hours ago
Expert: COVID-19 vaccines safe for kids, may allow return to 'normal life'
Parents need to know that COVID-19 shots are safe and effective for kids age 12 and older, an expert says.