The American Medical Association said in a report Thursday prescription of opioids between 2013 and 2017 declined by 55 million, or 22 percent. File Photo by John Angelillo/UPI | License Photo

May 31 (UPI) -- The American Medical Association issued a report Thursday that says physicians have made significant progress over the last five years to fight the opioid epidemic.

First, physicians cut the number of opioids prescribed to American patients by more than 55 million, or 22 percent, between 2013 and 2017.

Second, doctors increased the use of state monitoring program -- and third, they increased access to naxolene, which blocks the effects of opioids.

The number of physicians certified to treat patients with opioid-use disorder also increased, the report said.

"While this progress report shows physician leadership and action to help reverse the epidemic, such progress is tempered by the fact that every day, more than 115 people in the United States die from an opioid-related overdose," said Dr. Patrice Harris, chair of the AMA's Opioid Task Force.

"What is needed now is a concerted effort to greatly expand access to high-quality care for pain and for substance use disorders. Unless and until we do that, this epidemic will not end."

The report noted that there are, on average, more than 100 opioid overdoses in the United States each day.

Last month, a study by the IQVIA Institute for Human Data Science said prescription opioid dosage decreased by 12 percent in 2017, the largest single-year drop in a quarter-century.

Health News // 8 hours ago
Study: No sign COVID-19 raises odds for preterm delivery, stillbirth
In a sign that the pandemic may have spared pregnant women and their newborns, a new Canadian study suggests there was no increase in preterm births or stillbirths during the first year of the pandemic.

Health News // 9 hours ago
Cancer surgery at leading hospitals up to 30% more expensive, study finds
Aug. 3 (UPI) -- Choosing a leading research institution for cancer care comes with a cost, according to a study published Tuesday by JAMA Network Open.

Health News // 11 hours ago
Fewer doctors wearing white coat, but many in U.S. expect it
Your doctor walks into the exam room wearing a white coat. Or perhaps your physician has on a fleece or softshell jacket. Does it make a difference? Yes, according to a new survey. 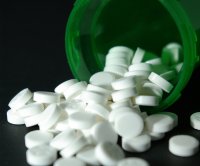 Health News // 20 hours ago
Clinical trials for cancer drugs not halted by COVID-19 pandemic
The pandemic widely disrupted medical care across the United States, but a new study reports that clinical trials testing cancer treatments were able to carry on.