A young woman with premature menopause might rejuvenate their ovaries with bone marrow stems cells, according to preliminary results of a clinical trial. Photo by StarFlames/Pixabay

March 19 (UPI) -- If a young woman has premature menopause, her own bone marrow stem cells might rejuvenate her ovaries, according to preliminary results of a clinical trial.

Information on the ongoing Rose clinical trial will be presented Tuesday at ENDO 2018, the 100th annual meeting of the Endocrine Society, in Chicago, Ill. And researchers plan to enroll 33 participants 18 and older in the clinical trial, with the study projected to be completed by February 2020 -- but they already have results from two women.

"In the two participants who have completed the treatment to date, serum estrogen levels have increased as soon as 3 months after the injection of stem cells, and the effect has lasted for at least one year," Dr. Ayman Al-Hendy, a professor of gynecology and director of translational research at the University of Illinois at Chicago, said in a press release by the Endocrine Society."Their menopausal symptoms have been alleviated, and six months after the injection of the stem cells into the ovaries, they have resumed menses."

The researchers collected mesenchymal stem cells from the two women from a posterior iliac crest bone marrow and used minimally invasive laparoscopy to inject the cells into one ovary. The second untreated ovary remained as a control.

The trial included frequent blood work, imaging of the ovaries, menopausal symptom questionnaires and safety studies over one year.

Because the women's estrogen levels have increased significantly and they have begun to menstruate, the researchers hope the participants again become fertile.

"Ultrasound imaging of treated ovaries shows significant size increase in the treated ovaries compared to the contralateral untreated ovaries," Al-Hendy said. "In the cases completed so far, the patients have tolerated the treatment very well with no complications or side effects."

He adds, in the abstract of the paper, which hasn't been released yet: "Longer follow up in a larger cohort will be needed to validate the utility of this novel approach as a viable treatment option for POI patients."

Usually, women's ovaries produce hormones and eggs until menopause in the early 50s. But about 1 percent of women have premature ovarian insufficiency younger than 40, including some as young as in their teens, the authors noted. 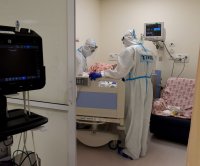