Researchers in Sweden and Finland say differentiating more specifically between types of the disease could allow for more personalized, more effective treatment.

Researchers in Sweden and Finland have classified diabetes into five distinct categories in a first step in tailor treatment for those with the disease. Photo by stevpb/pixabay

March 2 (UPI) -- Researchers in Sweden and Finland have classified five distinct types of diabetes that can occur in adulthood, instead of the two currently recognized.

The researchers describe this as a paradigm shift in how to view the disease and say tailoring treatment to the different types could be more beneficial for patients than current treatment methods.

The first results of ANDIS -- All New Diabetics In Scania -- which was a study covering all newly diagnosed diabetics in southern Sweden -- were published Thursday in The Lancet Diabetes & Endocrinology.

"This is the first step towards personalized treatment of diabetes," Dr. Leif Groop, a physician and professor of diabetes and endocrinology at Lund University in Sweden, said in a press release.

"Current diagnostics and classification of diabetes are insufficient and unable to predict future complications or choice of treatment."

About 425 million people worldwide have diabetes and the number is projected to increase to 629 million by 2045, according to the International Diabetes Foundation.

"Today, diagnoses are performed by measuring blood sugar," Groop said. "A more accurate diagnosis can be made by also considering the factors accounted for in ANDIS."

Researchers since 2008 have monitored 14,775 newly diagnosed type 1 and type 2 diabetes patients between the ages of 18 and 97. In Finland, they were studied by the Institute for Molecular Medicine Finland.

Type 2 diabetes, which accounts for 90 percent to 95 percent of all diagnosed cases of diabetes in adults, according to the CDC, was split into four groups.

The five types, which were found to be genetically distinct with no shared mutations, are:

The researchers later repeated the analysis in three studies from Sweden and Finland.

"The outcome exceeded our expectations and highly corresponded with the analysis from ANDIS," Groop said. "The only difference was that Group 5 was larger in Finland than in Skane. The disease progression was remarkably similar in both groups."

The researchers also want similar studies in China and India with people of different ethnic backgrounds.

"This will give us even better opportunities to tailor the treatment to each individual," said author Emma Ahlqvist, associate professor at Lund.

Dr. Victoria Salem, a consultant and clinical scientist at Imperial College London told the BBC that "there is still a massively unknown quantity -- it may well be that worldwide there are 500 subgroups depending on genetic and local environment effects."

Health News // 15 hours ago
Menthol cigarette use highest among marginalized groups, report finds
WASHINGTON, Jan. 26 (UPI) -- LGB Americans among the top 10 populations disproportionately affected by tobacco use, according to a new report by the American Lung Association.

Health News // 17 hours ago
Robot performs laparoscopic surgery on pig tissue without human help
Jan. 26 (UPI) -- A robot has performed a small-incision, camera-guided surgical procedure on the soft tissue of a pig -- a milestone researchers involved in the trial described as a step closer to fully automated operations on humans.

Health News // 19 hours ago
Survey: Most adults with asthma wear masks despite discomfort
Although they report difficulty breathing and discomfort while wearing a face mask, most people with asthma still use them in public places during the COVID-19 pandemic, a new study finds. 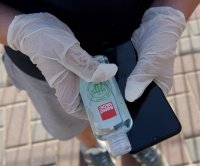 Health News // 20 hours ago
Asian Americans approach sun protection differently from other groups, study finds
Jan. 26 (UPI) -- Asian Americans protect themselves from the sun's potentially harmful rays differently from those in other racial and ethnic groups, and research into skin cancer risk needs to take these distinctions into account.