Critics alarmed at antibiotic use for livestock despite recent reduction FRIDAY, Dec. 15, 2017 -- Sales of antibiotics for use in U.S. livestock fell in recent years but still remain too high, according to the National Resources Defense Council.

The council reported that sales to the livestock industry of antibiotics that play an important role in human medicine declined 14 percent from 2015 to 2016, based on newly released U.S. Food and Drug Administration data.

However, the use of antibiotics in livestock is still much higher than 2009 levels, the council said.

The National Livestock Producers Association did not respond to HealthDay's request for comment on the report.

The new data do provide "a glimmer of hope that we can beat the growing epidemic of drug-resistant infections," said Avinash Kar, senior attorney for the council.

"The progress is no doubt influenced by the groundswell of change we've seen in the chicken industry in the past few years -- but beef and pork are lagging behind. It will take all hands on deck to keep our miracle drugs working when sick people and animals need them," Kar said in a news release from the group.

Last year, the council joined with other groups in petitioning the FDA to take a tougher stance against the overuse of antibiotics in farm animals. That petition is still pending, according to the council.

The World Health Organization has recommended a halt to the use of medically important antibiotics in animals that are not sick.

At least 2 million Americans develop antibiotic-resistant infections every year, and at least 23,000 die from such infections, according to the U.S. Centers for Disease Control and Prevention.

The U.S. Centers for Disease Control and Prevention has more on antibiotic resistance and food. 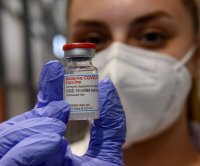