Eight children have been born after uterus transplants

More than 200,000 women in Europe are estimated to have uterine infertility, a type of female infertility for which there is no treatment.

The International Society for Uterus Transplantation will be held Tuesday to discuss the success of eight children born to women who have undergone uterine transplants. File photo by torwaiphoto/Shutterstock

Sept. 18 (UPI) -- Eight children born after uterus transplants is the culmination of 18 years of research at the Sahlgrenska Academy at the University of Gothenburg, Sweden.

From September 2014 to 2017, eight children have been born to mothers who had fertilized eggs returned after undergoing a uterus transplant.

The Sahlgrenska Academy conducted operations 2-11 in the world with living donors, resulting in the first child being to a woman who underwent a uterine transplant in 2014. This past summer, the seventh and eighth child were born one week apart.

"The hypothesis in our research is that we can do it significantly faster this way and with an earlier return home for the patients," Mats Brännström, professor of Obstetrics and Gynecology at Sahlgrenska Academy and senior physician at Sahlgrenska University Hospital, said in a press release.

The goal is to more easily overcome the challenge of operating inside the woman's bowl-shaped pelvis.

The robot-assisted uterine transplant surgery was first conducted in May with upcoming surgeries planned for October and December, and in future years.

"In the future, this method will become even more effective, and a clinical reality. We don't know if this will be in Sweden. Medically, it's fully realistic in five years, but there are many other decisions we have no control over," Brännström said.

The research will be presented Tuesday at the first Congress of International Society for Uterus Transplantation, or ISUTx. 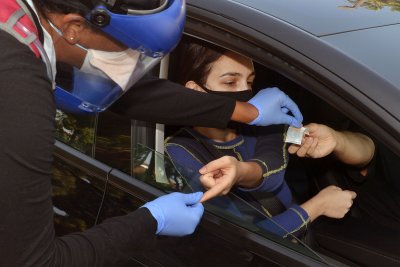