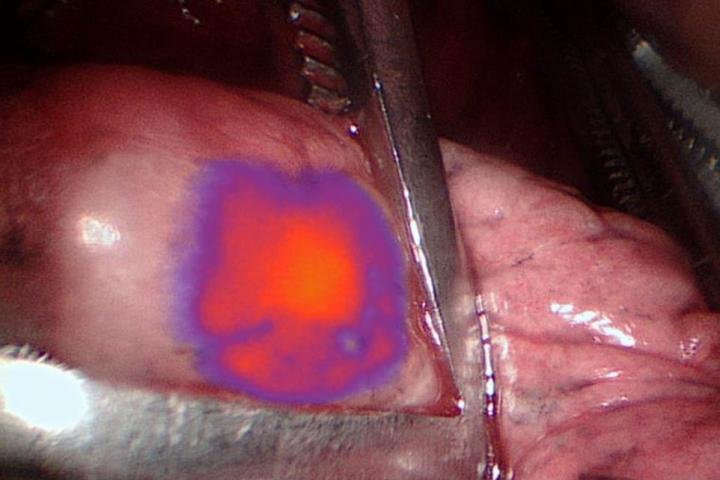 This image shows cancer cells glowing during surgery after being treated with a contrast agent and PET scans. Photo courtesy of Penn Medicine

July 28 (UPI) -- Surgeons at the University of Pennsylvania School of Medicine are able to identify and remove cancerous nodules by making the cancerous tissue glow, according to a new study.

"Surgically removing tumors still leads to the best outcomes in cancer patients, and this study shows intraoperative molecular imaging can improve the surgeries themselves," Dr. Jarrod D. Predina, a post-doctoral research fellow in the Thoracic Surgery Research Laboratory and the Abramson Cancer Center's Center for Precision Surgery, said in a press release. "The more we can improve surgeries, the better the outcomes for these patients will be."

The study, published in the July edition of the Annals of Surgery, involved the use of a near-infrared contrast agent known as OTL38, which makes tumor cells glow.

Using IMI, 60 of the 66 nodules were identified, or 91 percent, and doctors used IMI to identify nine additional nodules that were previously undetected by PET scan alone.

"This shows the contrast agent is allowing us to remove more cancer from the patient than we would have with PET imaging alone," Dr. Sunil Singhal, associate professor in Surgical Research and director of the ACC's Center for Precision Surgery, said.

"PET imaging still has an important role to play in developing treatment plans for patients, but given its limitations, it's clear that IMI with this contrast agent can improve the picture surgeons are seeing," said Dr. Sunil Singhal, the William Maul Measey Associate Professor in Surgical Research at Penn and director of the ACC's Center for Precision Surgery. "That's especially true when you're talking about nodules that are only a centimeter or smaller."

RELATED MRIs may be safe for some people with heart devices, study says